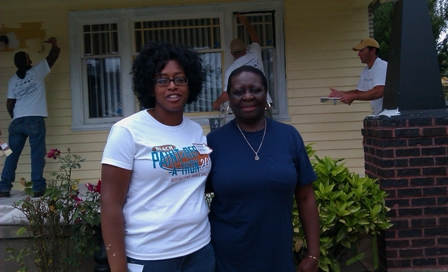 There were years when Wendy Williams thought she would be on the street. She was under fire from the IRS and she didn't have a working bathroom for three years.

Williams' fortunes changed when she got involved with Portland Community Reinvestment Initiatives (PCRI) and their Free Homeownership Retention Program for seniors.

"Without the program, my house probably would've been foreclosed by now," she says.

The program provides culturally specific home ownership retention and counseling. It connects clients with resources for such services as home repair, tax deferment, legal assistance and utility and energy assistance.

The program is a part of the Minority Homeowner Assistance Collaborative (MHAC), which includes the African American Alliance for Homeownership (AAAH), Hacienda CDC, NAYA Family and PCRI.

MHAC will be holding an informational session on the Oregon State Property Tax Deferral Program on Wednesday, Dec. 21 at the Oregon Association of Minority Entrepreneurs.

"It's important for black senior home owners because we connect them to agencies and provide access to resources," says Menefee. "It also helps agencies because it helps them tap into an under served population."

Williams has lived in her home for fourteen years. She says the sellers told her she wouldn't have to pay taxes on the property after ten years; after not paying taxes for a few years, the IRS came calling.

She also had a problem with the septic tank on her toilet. She had a portable toilet outside briefly. Then her doctor issued her a potty chair. When guests came over she would have to clean up their waste by dumping it in a bag and putting it in the garbage.

Williams says The Free Homeownership Retention Program has worked with her on paperwork and talking with the IRS. It also helped her get her bathroom fixed.

"I'm really grateful," she says. "Now company can come over."

According to the Urban League of Portland's "State of Black Oregon", Black homeowners are twice as likely as white homeowners to receive high cost, high interest loans and are more likely to be foreclosed upon in the current economic climate.

Currently, the retention program has a staff of three, with only one full time worker as well as the help of partnering agencies.

Nonetheless, clients say it has had a positive impact on their lives.

The senior, who has lived in her current home for 15 years, didn't have heat upstairs and had lead paint contamination in her windows – as a result her granddaughter had to go through two months of treatment for lead exposure and her husband developed respiratory issues.

Hampton didn't qualify for the traditional home modification program based on income. She was receiving Social Security disability benefits and her husband had been laid off right before he was to have cancer surgery.

Hampton was referred to the Free Homeownership Retention Program. She says it gave her access to a number of resources and helped her get heat upstairs, her windows replaced and her house painted.

"Mortgage payments were too high," says Jackson. "I'd make payments but I wouldn't eat."

She also became involved with Economic Fairness Oregon. Now she regularly contacts her representatives and advocates for other homeowners.

"If you're not in a certain tax bracket or neighborhood you don't qualify for services," says Jackson.

The traditional home modification program can take up to a year and often excludes people based on income, according to Carol Berger of AAAH. Many seniors live on a fixed income and don't qualify.

"There are a lot of good programs the government offers but we need to find more ways to get people to them," she says.