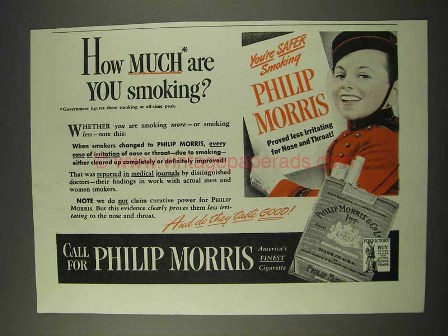 The cigarette maker's parent company, Altria Group Inc., said it will lower its full-year earnings expectations based on the costs tied to the payments for this and a separate case by a former smoker.

Under Oregon law, 60 percent of punitive damage awards must go to a state fund to compensate crime victims. Philip Morris paid the family its share of the judgment but contested the requirement to pay the state.

The company argued that the state released its right to collect that money with the company's master settlement agreement in 1998 with 46 states, five U.S. territories and the District of Columbia over claims about smoking.

The Supreme Court's ruling Friday reversed a lower court decision and said the state's share of punitive damages is due no matter what sort of lawsuit led to the award.

The money at stake is from a 1999 jury award in a lawsuit filed by the family of Jesse Williams, a janitor who had died two years earlier of lung cancer.

After years of appeals, Philip Morris paid the family in 2009, according to the Supreme Court's decision. The payment, it said, was more than $61 million, which includes economic damages, the 40 percent share of punitive damages, interest and costs.

A state official said there was no ready estimate of how much the state's 60 percent share is worth today, including interest and costs, and there was little anticipation it will be collected soon.

"We don't actually expect this to be the end of the litigation," said Tony Green, spokesman for Attorney General John Kroger.

A message seeking comment was left for Altria. In a statement, the Richmond, Va.-based company said it expects to record a pre-tax charge of $62 million related to judgments in the two cases and $57 million in related interest costs. As a result, Altria expects to earn $1.58 to $1.64 per share for the 2011 fiscal year. It earlier expected to earn $1.60 to $1.66 per share.

Excluding several other one-time items, the company expects to earn $2.01 to $2.07 per share for the year. Analysts polled by FactSet expect Altria to report adjusted earnings of $2.03 per share for the fiscal year.

The company's shares fell 6 cents in after-hours trading. They closed Friday at $28.41, down 27 cents.