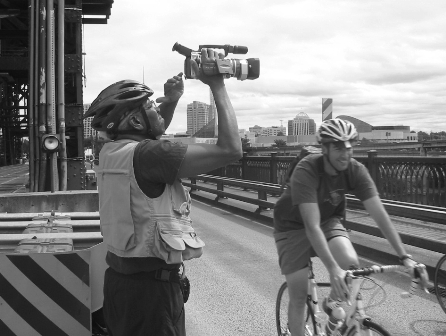 The Flying Focus Video Collective recently marked its 20th year of producing documentary-style cable television programming about progressive issues and organizations. Core members, including PC Peri and Dan Handelman, have documented so many events, speeches and actions that their catalogue of video reads like a modern history of Portland -- and the world.

The group was born during the presidency of George H. W. Bush, when Portland's downtown streets saw the biggest demonstrations in the city's history up to that time – as many as 10,000 people protesting against the U.S.'s first invasion of Iraq. The Skanner News spoke to video journalist Peri about the collective's work, and how the newest chapter of Portland's activist community, the Occupy Movement – which has triggered protests as big as those in the early 90s – is signaling a sea change in the medium of film.

The Skanner News: You were there when Flying Focus first started in 1991. What was going on then?

PC Peri: Massacre in the Middle East, and we needed to get the information out. We started out as an offshoot of CAUSMIME (the Coalition Against United States Military Intervention In (the) Middle East). Some of us had been working in video trying to do programs of our own, getting information out, and a collaborative effort was more productive.

TSN: What was the first thing that you did?

PP: Well let's see, we all had our own equipment, and we always had the philosophy of 'use what you have and don't go more high-tech than you can afford, or is necessary.' So we weren't using the most sophisticated stuff – in fact we were definitely using VHS. So we were getting out coverage of what was going on with the demonstrations – we even tried a news format at one point but that required more energy and coordination than we could muster up. So we went into a format that was getting information out about news and events using video as a tool for social change that spoke to people who were involved, from their perspective, to the outside community.


TSN: To me it's remarkable that Flying Focus is celebrating your 20th anniversary at a time when Portland is seeing the most activism since then. Do you have any impression of the significance of the Occupy Movement?

PP: One, almost everyone here has some kind of recording device, be it a cell phone or a camera, a still camera that takes video, video camera, audio recording device -- which is quite different than when we started. And at Occupy there were so many reporters that I don't think there was anything that happened that wasn't recorded in one way or another. Which means it gets out to the world faster and more efficiently.

The young woman who was, let's say an activist, an instigator, an incentivizer, in Egypt, came to Occupy Wall Street, and she offered a – as a matter fact she used an interesting term, what was that? Power to the people. It's getting out there.

Now the differences – it's all going out as it happens to the web, the trick is going to be in getting the big picture. Digesting it and being able to speak to those who have a vision of where to go next and who can be the operators in that – before the vacuum hits.

PP: The vacuum is always when things get stirred up and who the players are is not yet decided. So in many cases that has provided the opportunity for agents provocateurs to come in – the same thing happened to the Tea Party, and now it's going to be a question of how people decide to reach consensus about what democracy actually is and who gets to talk with each other—maybe the left is going to talk to the Tea Party? And we'll have to see how that works out.

So it's a little bit different discussion than what was when we covered George Bush on both sides of the river and ran it live – the forces were the same in that the power structure tried to hinder that transmission of coverage but it can't happen as easily now as it tried to do then. Unless they do electromagnetic rain.

TSN: So for a new generation of people who have never heard of the FFVC, what's the most important thing that you feel the organization, that loose group of people, has achieved through the years?

PP: Well maybe the most important is that we've trained so many people -- I think in the 20 years we have had as many as 52 people in a given event. And we have trained as many as 130 people who have gone out like ants and worked on projects all over the world – mainly all over the country but we've got somebody in Beijing now, we've got somebody in Germany. It happens, and the former Yugoslavia. So that capability spreads out – that's probably the most important thing.

The other is to look at the connections, the linkages. When you see something happening, what sparked it? And what does it affect? And look at those things, and get that information out. And make sure that the parties that are brought to the table are from the most capable to the least capable of us all. All those voices matter.

TSN: Is there a place where people can see your work? Do you have it digitally catalogued for people?

PP: We do. Go to our website, it's all right there.
For more information on the Flying Focus Video Collective go to www.flyingfocus.org .