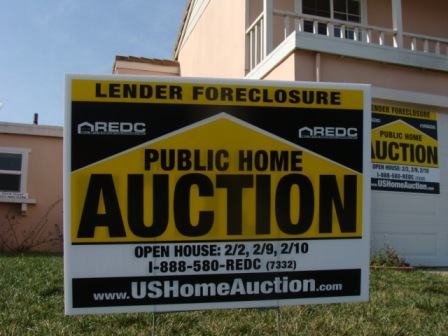 While it's hard to imagine anyone enduring a home foreclosure who has not suffered financial injury as a result, the 14 mortgage servicers penalized by the federal government began on Nov. 1 sending out mailed letters detailing the complaints process

Federal officials say they are actively investigating consumer complaints on home foreclosures, but state Attorneys General are sounding the alarm to counter small-time fraudsters who may try to rip you off by pretending to help.

Washington Attorney General Rob McKenna's office is taking an active role in warning consumers – who may already have been ripped-off by their home mortgage servicers – not to get robbed a second time by opportunistic con artists posing as government agencies but charging thousands of dollars for mortgage negotiations.

Established as part of a negotiated settlement between the federal Office of the Comptroller of the Currency and more than a dozen mortgage companies in April, the independent foreclosure review is designed "to correct deficiencies in their servicing and foreclosure processes and to engage independent firms to conduct a multi-faceted independent review of foreclosure actions that occurred in 2009 and 2010," according to a statement.

"Independent consultants are charged with evaluating whether borrowers suffered financial injury through errors, misrepresentations, or other deficiencies in foreclosure practices and determining appropriate remediation for those customers," the OCC said in a statement this month. "Where a borrower suffered financial injury as a result of such practices, the consent orders require remediation to be provided."

While it's hard to imagine anyone enduring a home foreclosure who has not suffered financial injury as a result, the 14 mortgage servicers penalized by the federal government began on Nov. 1 sending out mailed letters detailing the complaints process.

Washington state Attorney General Rob McKenna's office is cautioning consumers to scrutinize any paperwork they receive and make sure it is not a scam.

"There's been a lot of talk about errors in the foreclosure process in the last year or so," says Dave Huey, senior counsel for the Washington State Consumer Protection Division. "We just wanted to make the public aware of that even though we're not involved, because we know from experience that con artist when there's something in the news like this, they will use it to abuse people and to take unfair advantage of them."

Huey says the consumer test for reputable mail solicitations on foreclosure help is simple: If the mail is offering services that cost any money at all, it's a rip-off.

"So there are a couple of messages we want to get out and one is that if you get mail from an independent foreclosure review administrator – that's legitimate," Huey says. "It's the banks wanting to review your foreclosure, and see if you suffered any financial injury as a result of how that foreclosure was handled.

"This is entirely a free process, paid for by the banks, so if somebody says, 'You have to pay me $2,000 and I'll get you this result or that result, then walk away."

If you have not received a letter – or are not in a position to, since in fact your home has been taken away from you – you can also go to www.IndependentForeclosureReview.com for information about the review and claim process.  The telephone hotline for consumer information is 1-888-952-9105, Monday through Friday from 8 a.m. to 10 p.m. (ET) and Saturday from 8 a.m. to 5 p.m. (ET).

"The independent foreclosure review is a significant component of the mortgage servicers' compliance with our enforcement actions," said acting Comptroller of the Currency John Walsh in a statement earlier this month.  "These requirements help ensure that the servicers provide appropriate compensation to borrowers who suffered financial harm as a result of improper practices identified in our enforcement actions."

You only qualify for foreclosure-related losses " if they believe they suffered financial injury as a result of errors, misrepresentations, or other deficiencies in foreclosure proceedings related to their primary residence between January 1, 2009 and December 31, 2010," Walsh said

In addition to the outreach and claims program, independent consultants are required to review sample cases from each servicer.  "Where they identify issues, they will conduct additional secondary reviews to identify as many affected borrowers as possible," Walsh said.

The federal government's "enforcement actions" are also expected to require "enhancing oversight of third-party foreclosure service providers, upgrading management information systems associated with mortgage servicing and foreclosure processing, and improving communication with customers by establishing a single point of contact and eliminating 'dual tracking,' in which servicers continue to pursue foreclosure even though a borrower may have been approved for, or is performing under the terms of a modification or trial modification, among other steps," officials said.