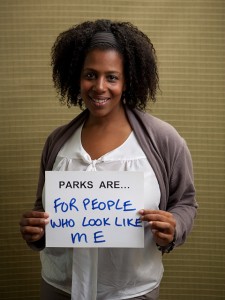 Rue Mapp travels around the country as a blogger for her website, www.OutdoorAfro.com. But just this year her efforts at encouraging more people to get active and shape a relationship with nature has taken off, with invitations to the White House and an advisory role on Fist Lady Michelle Obama's 'Let's Move' initiative. Last week The Skanner News spoke with Mapp, an Oakland, Calif., resident, during her road trip to Big Sur.

The Skanner News: What is it that made you come up with the concept of OutdoorAfro.com?

Rue Mapp: A whole lifetime of experiences that were informed by a few concepts. One was a love of nature, the second was the love and application of technology. And the third is a desire to always connect people – I am a networker by birth. And so it was really a coming together of things I really care about, the natural expression of who I was. And enhanced by my education, studying art education at UC Berkeley, where I was really helped to understand the role of visual representation to shape peoples' feelings and also to reflect back popular culture.

My first computer was a Commodore 620 when I was 11 years old, and my parents had a ranch about 100 miles north of where we lived in Oakland. So I had a lot of unstructured time in nature and was able to build on those experiences over a lifetime. And so in 2009 I was having a conversation with a friend who said, if you had all the time and money in the world what would you do? And it just rolled off my tongue: "Oh I would probably put together a website to connect African Americans to the outdoors." And she looked at me like – what?

It was this moment of realizing that I hadn't given something that was a part of me and something that I'd really taken for granted a voice outside of my own head. Within a week I went and put together one of those Blogger blogs. There was a sense of urgency that came over me that, yes, this is who I am and this is what I have to do. It began as simply me sharing about my own personal experiences and some of my thinking about African Americans and the outdoors and almost immediately their response was, "me too!" There were voices from all over the country who said, "Hey I thought I was the only one who enjoyed the outdoors." And then I realized very quickly that if you put all the only ones together we are actually quite numerous. And so over time OutdoorAfro has shifted to be an illuminator of the bright spots of African American participation in the outdoors and a way to inspire people and affirm peoples' experiences in nature in a variety of ways.

TSN: The thing that strikes me about this issue of exercise is—it's very serious. The government is writing press releases about the need for people to get out and get more active. It's a very serious thing—and yet when I look through your website what I see is people having fun.

RM: Yeah. And I think that is what we cannot lose in these conversations is the sense of wonder and fun and inspiration. Because the person who loves to connect with nature and loves the outdoors is going to have just as much if not more benefit as the person who's doing it to lose weight. And it doesn't make people feel good to be put in a sensitive position. To be put in a deficit position – "well why don't you?" And, "you need to!" And so I'm really interested in helping people recognize the outdoor engagement that they already have because everyone is connected to the outdoors in some way, identify what that is and build on that relationships in a way that's relevant to that person and that fits within their lives and brings them joy.

TSN: Have you been to every state?

RM: I haven't been to every state but I have my favorites. My most recent is Alaska. I hate to sound cliché but it really seems to me to be the last frontier, with this enormous sense of possibility, and this largeness of experience that's there to be had. We were driving along the Kenai Peninsula and I saw people moose hunting, bicycling—the real sense of openness and exploration, and a little sense of danger too.

Being in nature with wildlife or with landscapes that are beyond the imagination, it really puts you into perspective and humbles you and causes you to understand your place not in the hierarchical sense but within the natural spaces and all the species that exist in them.

TSN: What are a couple of beginning outdoor experiences that anyone could do that you recommend?

RM: I think that's a really good question, as far as what beginning looks like it's going to be different for different people, and it's back to what I said before – it's what it is you like. I do tabling events at farmers markets occasionally and I like doing that because I get to talk with people and respond to people in a way I don't necessarily get to do online. And people will start off the conversation the way you just did. And I say, being outside doesn't have to be about camping. Well do you like picnics? Well, yes I do. Do you like fishing? Well yes I like that too. So what I like to do is ask people to question themselves about -- what you like to do? What is it that you did as a child? What is it that makes you feel comfortable in nature? It might be that your nature connection is about family celebrations and being in the park for a family reunion. So again it's about connecting right where people are.

And the second step I would suggest is if you're interested in building on your outdoor connection reach out to people. Chances are you've got coworkers and friends who not only have expertise but also gear. People cite a common reason that they are prohibited from getting out is because of the high cost of gear, and I always recommend that people borrow gear from family and friends. All you have to do is ask. And chances are someone's got something waiting for you in the basement.

The third thing is the more obvious thing is to use your online resources, and that's what OutdoorAfro is all about. It's about people not only getting the visual representation and affirmation but it also tends to convert that digital conversation into action. So there's a connectivity link where people can go and join existing groups or create new groups, and there is also the possibility of just using that site to let people know you're out there. And people are looking for activity partners, we actually started a pilot meet-up group that quickly got over 100 members in the San Francisco Bay Area. And I intend to launch meet-up groups in several other areas in the United States where we can get together outside with our shared interests.

I think that African Americans have always had a connection to nature, like Sojourner Truth who led people to freedom across the landscape or George Washington Carver, who was more than just a purveyor of peanuts but really thought in innovative ways about land and its uses and sustainability. We also have our grandmothers and out grandfathers. So I want people to remember that our connection to nature is already at hand and all a matter of bringing it to light and building upon it for a more rewarding life and a more sustainable environment.