Nichole Maher to Portland: Admit It! You Have a Problem with Race

By Helen Silvis of The Skanner News
Published: 17 November 2011

For years, Nichole Maher begged policymakers and agencies to reach out to Portland's struggling Native American community. Their numbers were too low to warrant extra help, she was told. Yet, as executive director of NAYA the Native American Youth and Family Center, Maher knew her community was undercounted, living in poverty and sinking under the weight of institutional racism. Proving it was another matter.

"They would always say well, you know there isn't enough data or we don't have enough information to come up with a plan," she says. "And until we actually put together this comprehensive report using the best researchers in the country they just continued to put forth these excuses."

Maher is talking about the 'Communities of Color' report on Multnomah County's Native American community, released last month by researchers at Portland State University. The report offers proof of what Maher long suspected: "Our initial exploration of these numbers shows that there is a total of approximately 40,783 tribal members in Multnomah county," the report says. "This figure shows us that our 'official' (American Community Survey) measures undercount our community size by 47.2 percent."

The report also paints a devastating picture of the impact of racism on Native Americans, detailing telling inequities in almost every measure of wellbeing. The statistics suggest Native Americans fare worse than their counterparts nationally or even compared to Native Americans in King County. That surprised even Maher, she says. Yet despite the bad news she sees opportunities and hope. 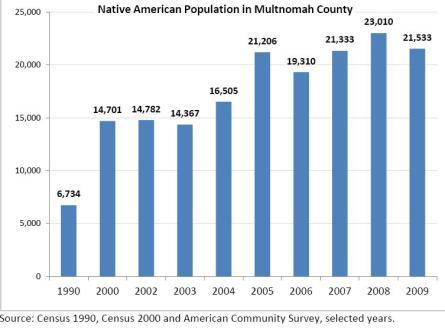 "It's heartbreaking, but it's not telling us anything we don't already know," she says. "We knew from looking through the lens of child welfare, or through the poverty lens: we knew it was pretty dire."

"What is really hopeful is that we came together as a community from all these different organizations," Maher says. "We said we need to stop having this debate about the data and start actually working on solutions."

Those children will make up the workforce of the future, meaning their success matters to everyone. Yet as the report details, more than 50 percent of Native children under 5 live in poverty, and just 40 percent of Native American students graduate from high school with their peers. 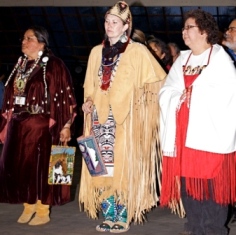 "This is one of the most segregated cities," Maher says. "And while we are increasingly becoming more diverse, lots of people in Portland live in a part of Portland that is very, very White. So they have just convinced themselves that they live in White city and there are not enough people of color to really worry about it. Meanwhile 52 percent of 0 to 18-year-olds are children of color, and as those communities are struggling, White Portland has blinders on."

Armed with the data, Maher says it will be easier to argue for institutional changes.

"I have seen people coming around and beginning to understand how important this issue is," she says. "Where we still have a lot of work to do is to help folk understand that we can't just continue doing things the way we have been doing them or we will continue to see growing disparities as populations of color grow. We actually have to do things differently and design the services to match the needs of who actually lives here." 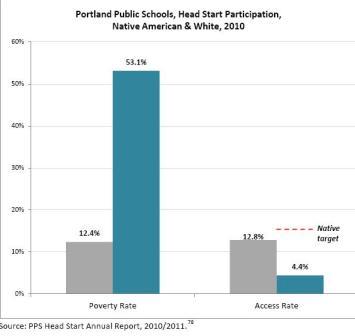 Head Start programs have been shown to have long-term benefits for children. Yet the report notes that of 824 pre-kindergarteners served in 2010-11, only five were Native American. It estimates that 211 Native children aged 3 and 4 live in Portland, and 112 of them are likely to be eligible for the program.

"Guess which population is least likely to be screened for support services and later on is the most likely to be on the individual education plan?" Maher says. "So there are these terrible consequences that we pay for a long time."

But why is the problem so much worse in Portland?

"I think Portland has convinced itself that it is a very liberal progressive city," Maher says. "They don't think they have a problem with race. And the policies for the last 30 years are that everyone gets treated the same. You have a general, one-size-fits-all policy, and I think that has deeply disadvantaged Native Americans and other communities of color. It has greatly increased the disparities. 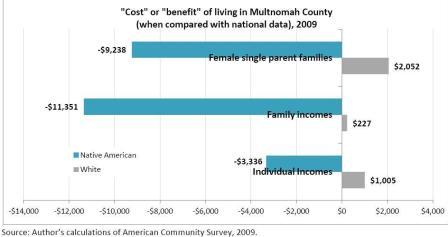 "We've known that's been happening. We have watched it happen. But Portland is staggeringly uncomfortable admitting we have a problem with race and unwilling to have this conversation."

Supporting Maher's conclusion that standardized services don't reach communities of color, are statistics in the report that show Native Americans are less likely to get the help they need from government agencies and nonprofits. Native Americans make up about 6.8 percent of Multnomah county residents poor enough to be eligible for housing help, for example. Yet just 3.2 percent of Housing authority tenants are Native American. Look at hunger and you find that only 3 percent of Oregon Food Bank's clients are Native American, despite staggering rates of hunger, especially for children and elders.

"Not getting access to the services: that's really an equal access and civil rights issue," Maher says. "We're paying taxes for these services we're not asking for anything special. We're just asking to have access to the same things that everyone else who lives in Multnomah County has."

Maher says NAYA and the Communities of Color coalition plan to push hard for change. Among the recommendations for governments, nonprofits, schools and business:
• Firm timelines to reduce disparities bolstered by resources and policy change
• Funding targeted to culturally –specific services
• Funding targeted toward reducing disparities
• Reducing poverty should be central to policy
• Count communities of color
• Prioritize education and early childhood services
• Fund community development
• Name racism
"The first step is to stop pretending race and racism do not exist," the report concludes. "The second is to know that race is always linked to experience. The third is to know that racial identity is strongly linked to experiences of marginalization, discrimination, and powerlessness. We seek for those in the White community to aim to end a prideful perception that Multnomah County is an enclave of progressivity.
"Communities of color face tremendous inequities and a significant narrowing of opportunity and advantage. This must become unacceptable for everyone."