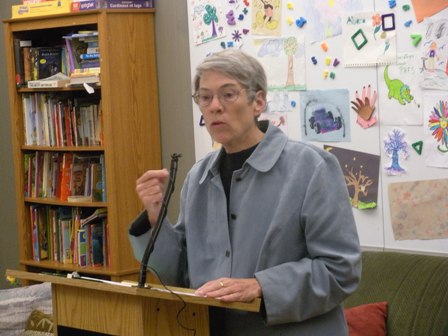 Winter is coming early and the City of Portland is preparing for how it will combat historic homelessness.

City officials report 68 additional beds opened up as of Nov. 1 to add to the 165 beds that were open to homeless children and families during the summer; total capacity for homeless families in the winter is a meager 233 beds.

According to Brandi Tuck, executive director of Portland Family Solutions, homelessness has increased by 35 percent in just the past two years.

The group provides care for homeless families with children, including temporary emergency shelter and house specialists who work with the families to develop self sufficiency plans.

Tuck says her department helped 85 percent of the homeless families it served move directly into permanent housing last year – all funded by charitable contributions from the public.

Lore echoed the lack of government funding, adding that 100 percent of shelter beds were provided by congregations within the faith community.

The two appeared at a press conference last week alongside other nonprofit representatives as well as Multnomah County and the Portland Housing Bureau to outline homeless operations for the winter.

Jean DeMaster, executive director of Human Solutions, pictured above, emphasized that Multnomah County and a coalition of faith-based and non-profit groups called the Family Shelter-to-Housing Partnership have a commitment to solve the problems that cause homelessness.

She says Human Solutions works to set up homeless men and women with jobs and provides a space for homeless children and their families.

She pointed out that they have a warming center on 125th and Halsey, which relies on public donations, most of which have come from faith organizations. The center has cots for families to sleep on but it can't provide pillows and blankets unless people donate money.

Other year-round services include the Goose Hollow Family Shelter, operated by Portland Homeless Family Solutions, Human Solutions Daybreak Shelter Network, and My Father's House and My Sister's House in Gresham.

Services for homeless families with children are available at the day shelter at 13 Salmon Family Center, and the day facility at the Daybreak Shelter. Additional housing placement is provided by Human Solutions.

Following DeMaster's presentation, a formerly homeless woman, identified only as Georgina, gave testimony on her experiences with Multnomah County and the Family Shelter-to-Housing Partnership.

She says she met a lot of volunteers who worked with her family and even helped her kids with homework.

"I learned how to see credit, do background checks and fill out applications for landlords," she says. "I also built friendships that will last forever."

The woman said her family would be moving into an apartment the next day. She pledged to come back and volunteer.

"Critics complain that governments shouldn't interfere," says Kafoury. "I disagree. It is our role to help families find stability."

Erickson says that there will be a big job ahead for Portland this winter. Shelters are opening early in preparation for the cold weather.

Erickson notes that shelter beds have almost doubled since 2004 and that the coalition has managed to help more than 7,000 families get off the street since the 2010 program.

Liesl Wendt, the CEO of 211 Info, says that among the many services the group's telephone referrals offer is help with transportation.

She says 211 Info's website, at www.211info.org, is constantly updating information on available beds as well.

The county and the City of Portland say they will provide the ability for 90 families to move into permanent housing this year.