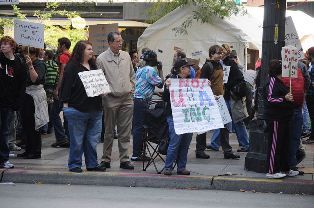 SEATTLE (AP) -- In the dead of night, as drunken Halloween revelers streamed into the street from nearby bars, Karen Strickland tried to teach Occupy Seattle protesters how to get their message across to politicians.

Other lessons - including the history of labor movements, writing a "position statement" and the language of a Martin Luther King letter - were held as community college instructors from around the Emerald City gave free classes earlier this week in an attempt to bolster a protest that had been struggling to capture the attention of a city with a vibrant history of protests.

And as the Occupy movement shows signs of fracturing after violent outbreaks in Oakland and elsewhere, instructors here say they'll continue efforts to mentor the mostly young people who have taken to the streets over the last several weeks.

"We didn't talk about their particular strategies," said Strickland, who is the president of the American Federation of Teachers Seattle Local 1789. "I guess my impression is that these are people who are thoughtful. They certainly don't have all the answers. They make mistakes along the way. Does that mean they're ineffective or pointless? I don't think so."

From San Diego to New Mexico, Occupy protests have also played host to academics volunteering their time to provide free classes. In Seattle, the teacher's union for the city's community colleges supports the protesters and quickly organized the lessons at Seattle Central Community College, where the local movement recently relocated.

For weeks, Occupy Seattle was unable to attract more than a handful of people to camp overnight at the downtown plaza where it began in early October. A combination of cold, rainy weather and a police-enforced ban on tents dwindled their numbers.

An internal debate over whether to move the occupation to City Hall after an offer from Mayor Mike McGinn also divided the group. It got to the point that even a writer at the liberal alternative newspaper "The Stranger" complained about Occupy Seattle.

"The problem with Seattle's protesters is that they get caught up in fighting what is. What they need to do right now is give an example of what can be," writer Paul Constant posted, later adding, "make your camp a destination that people want to visit. Making this whole thing a battle over a public space that nobody likes is embarrassing and it flies in the face of what the Occupy Wall Street protesters have created."

Eventually, organizers decided to take the camp to the college, located in the middle of a lively urban neighborhood, where the administration is tolerating their tent city for now. It has, in some ways, reinvigorated the protest. Medical, information, books and food tents are among the 50 or so that have moved onto the college campus.

Somewhere between 100 and 200 people are now camping overnight, organizers said.

Still, it remains to be seen whether this evolving protest will measure up to Seattle's history of robust social movements.

In 1919, a general strike that began in the shipyards shut down the city, becoming one of the first successful city-wide work actions in the nation. During the Vietnam War years, University of Washington students would march down Interstate 5, halting traffic. One of the first chapters of the Black Panther party outside of California was established here in the late 1960s.

"If someone in California says Seattle, people think WTO," said Marissa Adams, 21, a California college student who has been volunteering at Occupy Seattle for a couple of weeks.

Worries that there would be clashes between police and occupiers when the group moved to Seattle Central Community College last weekend led to the teach-ins, with the community college teachers establishing a presence. Beginning at 8 p.m. Sunday night, the lessons went through the night, Strickland said.

First it rained, and then the cold set in. Each of the eight lessons average about 10 people, Strickland said.

"I think there are things that need to be learned. I also think that's there's new aspects of a movement here," said Esther "Little Dove" John, a part-time Seattle Central instructor, who has lectured on nationwide 19th century economic protests.

More teach-ins are planned, Strickland said, although next time with more student involvement. And perhaps not overnight.

"I think there's plenty to be learned. Some are being learned. Some things are not. And that's why it's important to have education," said Sarah Laslett, director of the Washington state labor education and research center at South Central Community College. Laslett, who was active in protesting South African apartheid in Berkeley in the 1980s, plans to give a lecture to Occupy on working people losing wealth.

In San Diego, local university teachers and lawyers have led lectures, including one about American imperialism and the history of political thought. One lecture was interrupted by police when officers put up barricades.

Last month, professors from the University of New Mexico took part in a series of teach-ins at a makeshift protest campsite connected to "(Un)Occupy Albuquerque" protesters. Organizers said the lectures were aimed at discussing how current protests against Wall Street around the country compare to previous protest movements.

Among those who gave lectures were UNM Architecture professor Mark Childs who spoke about "Places of Protest," and American Studies professor Alyosha Goldstein, who lectured on the "1968 Poor People's Campaign." Professors and activists also gave students training in non-violent civil disobedience - tactics some protesters later used when state police raided the site after university officials ordered the campsite closed over safety concerns.