Trina Jackson: A Discussion About African Americans and Immigration 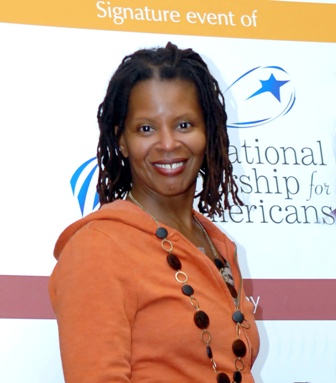 The National Immigrant Integration Conference (NIIC) was held last week at the Westin Hotel in Seattle. Featured were 12 immigrant-rights coalitions from across the country searching for effective ways to obtain solidarity in communities around the world. Workshops focused on ways to deepen understanding of immigrant integration through film, discussion panels and lectures.

At a panel focused on bringing together immigrant and receiving community members, we caught up with Trina Jackson. She's an activist and organizer for the Network of Immigrant and African Americans in Solidarity, based in Boston.  We asked her to share some information about this cause.

During your panel discussion you made the comment "there aren't enough of us (Black people) here." Why do you think that?

I think a lot of African Americans feel threatened by immigration in terms of jobs and housing and I think that's a real threat, but we know that immigrants themselves are not the cause. We know that there is a bigger structure and it's a system of racism and a legacy of slavery and that all these other systems are really at work. But there are real threats that we feel. I also think we are busy trying to survive. Language barriers, cultures, how we talk, how we gather haven't bridged yet.  A lot of people who fill these conferences are from white mainstream agencies and we haven't found them helpful for our situations so we aren't going to be at conferences like this.

What do you want people to know about immigration integration?

Well, that it goes beyond integration. As African Americans we know that integration was only the start, it didn't necessarily transform power relationships; it's more than just integration and access. But you have to transform systems and structures in order for there to be real equality and equity.

It's interesting we are at a conference called immigration integration. But as African Americans we know it's more than just integration, it's more than just assimilation, it's real systems change and the potential for economic justice changing this economic system (and) challenging the way this economy is fundamentally set up. To continue MLK work -- he knew economic justice was where the work needed to go and I think we should continue that.

What are some of the barriers that you feel the community creates?

We internalize some of the things that have been said about us; we know that we are at the top of the health disparity list, with wealth gaps etc. I think one thing that we do is internalize some of those messages and stereotypes, and when you face a constant threat of unjust treatment it's easy to blame each other and not recognize that it's a whole system at work. That's one thing we can do differently to be a little more self- determined. I think the government continues to profit from this competition, this tension, which is why this Occupy Movement is helpful in advancing that conversation. Black folks have been dealing with all this stuff for a long time and we don't have to do this alone; we can reach out for allies.

What sort of ignorance are you seeing when using the dialogue method?

A lot of the immigrants of color do not know anything about African American history, don't know a lot about U.S. history as it pertains to African Americans, so that's one education need that we address right away. On the part of African Americans, those of us that are native born, whose ancestors were enslaved here, we don't always understand some of the issues that are pushing people here, we don't know where they are coming from, and it's complicated because many of us are in competition, forced competition with each other. We don't choose this, it's been forced upon us by the same economic racist system that we've always struggled with -- in competition for jobs and things like that. We need to have an analysis around that it's really important and there is a lot that we can do to understand each other.

What can we do to live in solidarity?

We can recognize that our African American community is changing because of integration. A lot of Black folks in our community are from parents who were foreign born – Africans, a lot of Caribbeans -- our communities as African Americans are diverse that way. I know that because of racism in this country we have to deal with the legacy of slavery. Our ancestors having been enslaved here is kind of the identity we wear all the time; as a community we have to appreciate that we have diversity on that level and that's one place that we can start.

What that means is us having internal dialogue with each other so we can begin to appreciate those kinds of aspects about our community as part of our African American heritage. This is hard for us because we are still struggling as Black folks whose ancestors were enslaved here and kept from a lot of the stuff that we see immigrants of color being able to do -- buying homes, owning businesses, getting resources for schools and stuff like that. But, we have to make sure we are able to hold both, at the same time, the changes and the diversity plus our unique history in this country.

Once the African American community begins to realize that the dynamic of African Americans in the U.S.has changed, what are steps we can take to become accepting of this new idea?

We can continue to be proud of ourselves and how far we came and what we've done to make this a better place for everybody, because it's really through the African American experience that immigrants can find their voice and be more politically active. We've contributed to a lot of that work and there is a lot to be learned from our experience; we can start to share that. We can build relationships with people, alliances with people, and we don't always have to see eye to eye for there to be cohesion and collective movement. That's not necessary -- we don't always have to try to blend in. We can be uniquely who we are and I feel that's the way that we build authenticity.

With all the work that you are doing, what do you want to see happen?

I want to see movement building. I want to see people building relationships and having analysis about the systematic and structural stuff. I want to see the relationships transformed beyond just a campaign. We have to see the relationships transformed so when we organize again we have an understanding about who we are and how we work together. Lots of leadership devoted to the youth; I'd like to see us challenge this notion that if you talk about race and racism that it's divisive. We need immigrants of color to say, "We will talk about racism and we are not trying to adopt the white norms so we can avoid the scrutiny and the discrimination." I would like to see immigrants of color step up and recognize the racism that is very much a part of this country.

Can you give me three steps that you feel are important in making that happen?

Dialogue and outreach. For example, if you want to involve African American support on a campaign, there has to be some bridge building and some relationship building and I think building our youth and nurturing them is a concrete area.

What's the first step we can take to actively move this forward?

(Regarding) our community leaders and elected officials: Those of us on the ground need to go to them and tell them that we need for you to take more leadership and be better role models for how we build coalition. We need for all of our Black community leaders -- whether faith-based or from the Urban League -- we need to see those visible community leaders building more coalitions with immigrants of color. We still look up to those leaders in our community; we still see them as representing the established Black leadership. It doesn't have to be so male oriented or straight oriented, but the visible, entrenched, Black leadership is what we need to see.

For more information about the Network of Immigrant and African Americans in Solidarity, click here

(Traci Tate is a student in the University of Washington Department of Communication News Laboratory.)