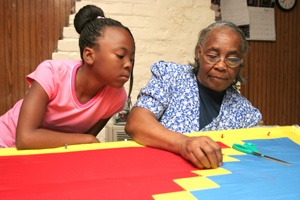 Mary Lee Bendolph, right, and her granddaughter, Tausy, work on a quilt.

A group of African American women from rural Alabama have created an art form that is causing a national sensation — and it has arisen out of something as traditional as apple pie — quilts.
The women of Gees Bend, Ala. Are showing their extraordinary quilts at the Greg Kucera Gallery, 212 Third St. S., through Sept. 2. Hours are 10:30 a.m. to 5 p.m. Tuesday through Saturday.
These quilts relate to the ongoing tradition of American patchwork quilts in ways similar to how American jazz and rural music forms relate to European classical and folk music. A comparison to music is apt, because the quilt makers often refer to church music as a major source of their inspiration — "quilting and singing, singing and quilting."
Gee's Bend is a community of about 700, among whom are the descendants of three or four previous generations of female quilt makers. Because of its remote location, Gee's Bend and its quilters became slowly known to the outside world.
1n 1966, the Freedom Quilting Bee was formed in nearby Rehoboth, Ala., to allow the women a chance to collectively produce and sell their quilts. A brief contract with Bloomingdale's store allowed for a foundation of commercial success, but expectations of "consistency" in their products led to disillusionment among the quilters.
A 1972 contract with Sears, for corduroy pillow covers, lasted 20 years and provided long-term improvement in their lives but not in their art — save for introducing corduroy to their quilting.
The recognition of the women of Gee's Bend as artists came through contact with members of New York's art scene. In 1967, Lee Krasner visited Gee's Band with her dealer, Donald McKinney, of Marlborough Gallery. Both bought quilts and slowly, by word of mouth, the reputation of the women of Gee's Bend as quilt-making artists grew.
In 1999, William Arnett, creator of the Tinwood Alliance artists' collective, brought the quilts to the attention of noted writer and curator Jane Livingston. Her essay, "Reflections on the Art of Gee's Bend," was the centerpiece for the 2002 exhibition catalog produced by the Houston Museum of Fine Arts for the quilt exhibition, which has traveled to the Whitney Museum of American Art, Boston's Museum of Fine Arts, the Los Angeles County Museum of Art and the Milwaukee Art Museum, among others others. The Tacoma Art Museum will host the show next summer.
Along with the quilts, etchings by two women — Mary Lee Bendolph and her daughter-in-law, Louisiana Bendolph, both from Gee's Bend — will be shown at the gallery.