By Bruce Poinsette of The Skanner News
Published: 28 October 2011 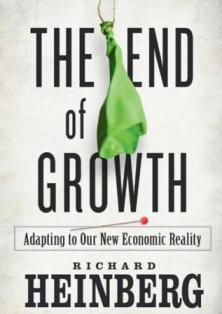 There are a number of problems facing East Portland, including the highest mortality rate in the county, under performing schools and lack of public transportation and healthy grocery stores.

According to author Richard Heinberg, these issues arise from the larger problem of an energy shortage that has coincided with the recent recession.

The East Portland Action Plan (EPAP) hosted Heinberg, whose most recent book is "The End of Growth", as he spoke on the need to transition away from fossil fuels at the Portland Auditorium last Friday.

"Energy enables what we do," says Heinberg. "Imagine pushing your car for 20 to 30 miles. That gives you an idea of what a gallon of gas does."

According to Heinberg, oil has become more difficult to produce because a lack of availability of the "cheap, easy stuff."

He says that whenever oil prices spike it is followed by a recession.

During the last recession, Heinberg says that people in the suburbs could no longer afford their mortgages because they were paying too much for gas, among other things.

This is evidenced by East Portland, which has experienced population growth but hasn't seen a similar expansion in areas like employment and public transportation.

Members of the EPAP have organized events that highlight advantages of alternative transportation like biking. They have also held meetings to assess the workforce of the community. However, these activities can only go so far in providing jobs without outside investment.

Heinberg notes that government investment in energy has historically addressed unemployment. He says the US has a history of government pouring money into infrastructure projects, which help create jobs and consequently, allow citizens to reinvest their earnings into the economy.

Heinberg says renewable energy will be a multiple decade project that can't be expected to "boot strap" itself into success.

The Obama Administration has suffered a number of setbacks in its green energy initiative, most prominently the failure of Solyndra, as well as state legislatures refusing to spend stimulus money on green projects.

This highlights another issue Heinberg addressed, which was the broken US political system.

"Occupy Wall Street was inevitable," he says. "It's the only hope for this country. We've legalized corruption. Buying and selling politicians is OK."

Heinberg notes that our currency is no longer backed by gold and silver. Instead, he says we run on debt.

"Our money comes from others taking on our loans," he says. "It's a kind of pyramid scheme."

The result has been an increase in debt in all categories, but especially in the government sector, he says.

Heinberg also notes that in 2011, the economy effectively stopped growing. He says we tried the Keynesian method of spending and now we're attempting austerity.

This method has been practiced in countries like Greece and Spain. The results have been mass protests.

He reminded the audience that Greece hired Goldman Sachs to falsify economic data so the country could get into the European Union.

Protests in Greece have recently turned violent, suggesting that the public will not accept austerity, especially from a corrupt government.

Occupy Portland hasn't reached that point and Heinberg sees a need for communities to start becoming more self sufficient as the next step in their protests.

He says that as the mainstream institutions come apart there will be more reliance on community economic laboratories, which refer to things like food co-ops, free clinics, car-shares and one-stop shopping centers.

"If you have a lawnmower that you use once a week, why can't it be part of the community," says Heinberg. "The economy is a subset of the environment, not the other way around. Growth is not normal or natural and it can't go on forever."

He emphasizes that we're going to become more dependent on organizations that can function without growth. In other words, small businesses.

Also, he says we're going to have to make non-renewable resources recyclable.

Heinberg suggests developing an alternative currency as insurance. He says we've delegated the financial system to banks, which are commercial institutions.

This is evidenced by the fact that the major shareholders of the Federal Reserve are multinational private banking institutions.

Not surprisingly, Heinberg advocates taking your money out of Bank of America.

"Get to know your neighbors," says Heinberg. "We need neighborhood centered adaptations for change."