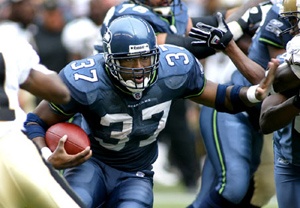 CHENEY, Wash.—For a moment, it appeared Shaun Alexander was simply acting like a spoiled, reigning league MVP with a new, $62 million contract.
Alexander emerged from the Seattle Seahawks' locker room to a crowd of about 100 autograph seekers at Eastern Washington University. Unlike many of his teammates, a smiling Alexander shuffled past everyone.
"Sorry. Gotta go," Alexander said sheepishly.
But this was no blow-off. Alexander was hurrying across the street to the players' dormitory, where he was late for a noon meeting on the front patio with three teenage boys and a fifth-grader.
Alexander befriended the local kids a few summers ago. He asked the four autograph seekers to look up a Bible verse and report back to him the next day.
Sure enough, Ryan Towner, Chase Anderson, Drew Peterson and Tristan Fillipo all recited it in unison while waiting for Alexander outside the dorm.
Alexander does this every summer, asking kids seeking autographs about their faith and their favorite scripture.
The ones who connect with him — instead of wondering what the heck this NFL superstar is talking about — get lunch trips to a nearby pizzeria. Alexander's four newest disciples enjoyed one last week.
During it, Alexander invited them to ask him about anything. Football. School. Girls. Marriage. Babies.
"Anything and everything," he said. "And they did."
"Before it was Nate, Andrew, Joshua — Joshua, wow, he just graduated," the 5-foot-11 Alexander said while sitting in the shade of a golf cart after practice.
"I'm going into my seventh year here. I remember when Ryan was a chubby little kid. Now he's taller than I am."
This is the Alexander beyond the rushing title and the MVP, past the Madden video game cover and Chunky Soup commercials. And far beyond his much-documented lash-out at coach Mike Holmgren two years ago.
He said the coach "stabbed me in the back" immediately after Holmgren gave quarterback Matt Hasselbeck the final, 1-yard carry of the 2004 season instead of Alexander. Alexander lost that rushing title by a yard.
This is also Alexander: He has a wife of four years, Valerie, and two daughters, Heaven, who turns 3 next month, and 1-year-old Trinity. He has a foundation in his name that focuses on leadership and character modeling for fatherless, teenage men.
Last winter, Alexander spent a midweek off day during Seattle's playoff push inside a suburban children's playroom. Before that, Alexander hosted a young cancer patient from a Seattle suburb at a Seahawks practice. He told him, "Man, I see more people win that battle than lose it."
He knows some see this as publicity stunts. Others roll their eyes at Alexander talking about God yet again.
He doesn't care.
"I don't judge people," he said. "My No. 1 goal is to humble myself, which is hard for me to do — for anyone in the NFL, it's hard, because your name is shouted so much.
"So I really don't get into what people are thinking."
Ryan, Chase, Drew and Tristan think Alexander is way cool.
They have Alexander's cell phone number. He sends them text messages all year, asking if they are "staying strong, making the right decisions," Drew said.
Their friends think it's awesome that they have Alexander as a pal, but the boys keep the friendship to themselves.
"We don't want to press people onto Shaun," Drew said.
Initially, these budding athletes couldn't believe Alexander was relating to them.
"We were star struck," Chase said.
"Then once we first went to lunch with him, we saw that his life is not about football," said Drew. "But he kind of keeps that to himself.
"Now, we just see him as a regular guy. It's crazy that someone with that much money and talent can be so humble."
— The Associated Press