Candlelight Vigil in Dawson Park Gives Powerful Message: Nobody Should Die for Love

By Helen Silvis of The Skanner News
Published: 20 October 2011 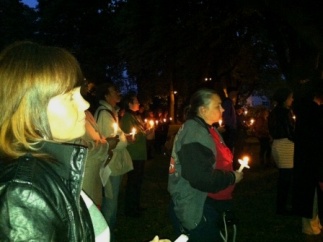 (UPDATED Oct. 21) A crowd of about 40 people turned out to Dawson Park in North Portland Thursday evening to remember the 27 victims of domestic violence killed during the last year. Around the stage, paper bags, lit up from within represented the dead. The candlelight vigil, organized by Portland Women's Crisis Line, aims to bring the community together to stop partner and family violence.
Rebecca Nickels, executive director of the nonprofit crisis line, introduced the speakers, saying it is the stories of those who have escaped violence that make it possible for her to continue her work. 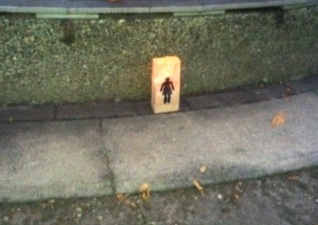 Survivor Anastacia Papadopulous told of escaping a violent relationship. After a vicious attack, where her husband bit off some of her nose and attempted to kill her in front of her children, Papadopolous called the Portland Women's Crisis Line and was given help to leave. Now, she said, she was lending the only thing she had in order to give back, her voice. 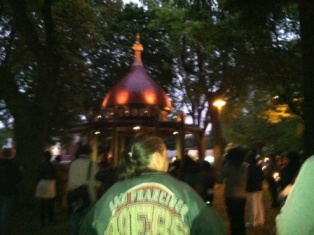 Through speaking out, Papadopulous said, "I take something back that was taken from me over the course of 10 years living with an individual who was very violent, physically and emotionally abusive."
More people need to help to prevent more lives being lost, she said.
"We need to talk about domestic violence, not only in the month of October; we need to talk about domestic violence every day because it happens every day. 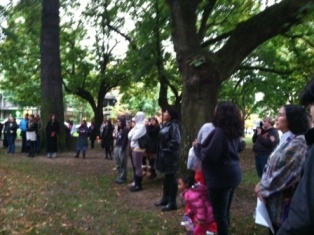 "I remember coming to last year's event, and thinking I would have been one of those bags," Papadopolous said, her voice breaking. "My name would have been called out and my parents would have been present and maybe even my children if he hadn't killed them too."

Friends and family of slain teen Yashanee Vaughn also took the mic. Elder Elmer Yarborough, spoke powerfully of being sexually abused as a child, and about the terrible impact of seeing his mother lying on the floor with her head split open and bleeding, left unconscious to die while her attacker continued watching television. 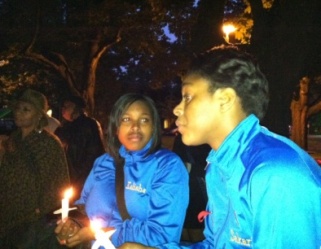 If Yarborough had not been able to call the police his mother could be dead, he says. She carries the scars to this day.
"I look on the scar and every time I see it I become angry again, but then I remember that my mom survived.
"Young people often times make excuses for why their boyfriends beat them, make up excuses as to why they should succumb: he had a bad day, he was drunk… There's never, ever a reason for any man young or old to put his hands on a woman EVER. I don't care what she did, no woman ever deserves that.
"This is an epidemic that has to stop," he said. 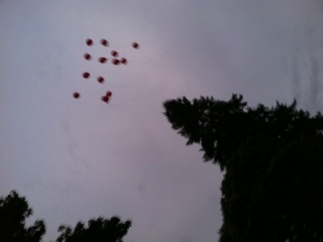 Yarborough called up Yashanee Vaughn's little brother Keon Tae who brought red balloons.
"As we release these balloons we will never forget Yashanee or anyone else that died because of violence. It is my hope that young men are held accountable for their crimes," he said.
"Young women, set an example, that when a man put his hands on you, you walk away from him so that your children not be exposed to such violence that they grow violent and become violent themselves." 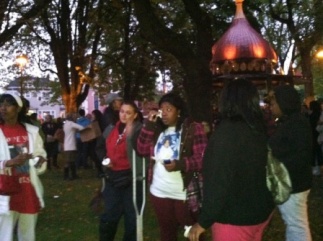 Several other survivors spoke powerfully moving many in the crowd to tears.
"We all play a role in ending domestic violence," Nickels told the Skanner news before the event. "Often when we are talking about domestic violence people may feel overwhelmed and uncertain how they can make a difference."
The Crisis Line offered case management support to 350 people last year and fielded 23,000 calls, Nickels says.
"Some are from community members and professionals, but the vast majority are people experiencing domestic violence." 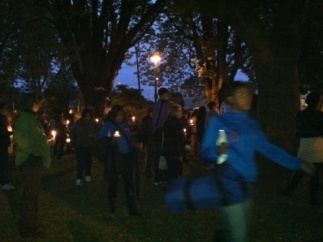 According to the State of Oregon statistics, 35 people lost their lives to domestic violence in 2010 and almost one-third of Oregon women have experienced violence from an intimate partner at some time in their lives. Sadly, children witness many of the assaults, including sexual assaults, putting them at risk for emotional problems, as well as making it more likely they too will be victims of family violence.
Organizations like the crisis line, Rapahel House, Volunteers of America's Home Free program and Baradley Angle's Healing Roots center are dedicated to helping victims reach safety, despite the fact that most have lost funding during the recession. The crisis line, for example, lost all of its county funding this year, taking a 7 percent dent in its income.
National studies show that women of color are among the most vulnerable. The National Violent Victimization and Race Survey found that the prevalence of intimate partner violence was highest for Native American women. More than 23 of every 1,000 women reported intimate partner violence, compared to 8 in every 1,000 White women and 11 in every 1,000 African American women. Men too can be victims of partner violence although they are less likely to be seriously injured or killed by a partner. 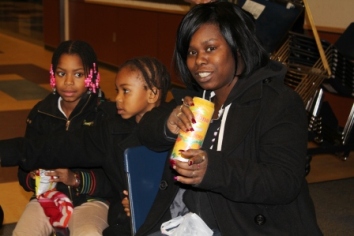 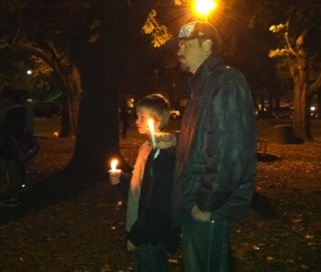 Community members who know a victim can offer support, Nickels says. "Simply listening, believing what they tell you , and supporting them to know they have choices is a very important thing you can do," she says. "Tell them they don't deserve to be hurt and that love does not equal abuse; people don't hear that enough."
Calling 911, when fighting starts, educating yourself about domestic violence, and interrupting verbal abuse or violence when you see it, also helps prevent violence.
Letting people know you don't tolerate racist, homophobic or sexist 'jokes' is another way people can send a message about treating others with respect, Nickels says. For those who can and want to do more, volunteering and donating money also helps.
The Portland Women's Crisis Line operates 24-hours a day at 503-235-5333.