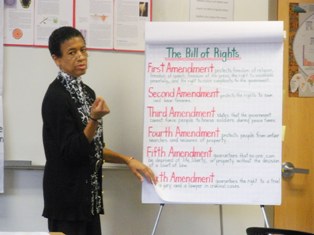 Too often African American students lose interest in school because the curriculum is irrelevant to their lives. That was the thrust of the Teaching with Purpose Conference, hosted by Portland Public Schools teacher Karanja Crews and the Journey to Freedom Foundation.

Educators, parents, community members and even a politician attended the event, yet they amounted to just a dozen or so people, fewer than organizers had hoped to see.

The conference was separated into two parts. First was a presentation on the Journey to Freedom Project.  After that, nationally renowned educator Augusta Mann, demonstrated her strategy of "Dancing Definitions."  Mann is the former program manager for San Francisco State University's Center for Applied Cultural Studies and Educational Achievement, which specializes in culturally-centered education for African Americans.

A screening of "GhettoPhysics" was originally scheduled as a third part to the seminar but not enough people decided to stick around after the first two sessions.

The Journey to Freedom section began with attendees sharing their purpose for teaching, with many asserting that learning is a "life-long  process".

Crews, the founder of Journey to Freedom and a teacher at Vernon Elementary School, spoke about his experiences teaching in two very different school districts.

He revealed that before coming to Portland Public Schools, he worked in Beaverton for four years.

"I was there for a reason," said Crews. "They needed to see diversity."

Only one parent gave him grief for exposing his students to extensive African American history, Crews said. And students from his Beaverton classes still keep in touch with him and offer to volunteer with current educational projects.

Yet, when Crews transitioned to the Young Men's Academy at Jefferson High School, he found  little parental support and less motivated students. In response he developed and copyrighted the game "Journey to Freedom:  The Power to Read and Write", to expose the students to Black history.

The game has the students play the role of enslaved Africans who can only win their freedom through mastering reading skills. At the young men's academy, Crews says  he even took away students' desks and supplies and had them eat grits to make the simulation more real.

To play Journey to Freedom, students draw cards that pose questions about Black history. Designed like the questions on the state reading test, they also teach phonics and phonetic awareness.

The game doesn't end once a student masters reading personally.

Students can only win once they go back and teach others to read, which is a concept borrowed from the Underground Railroad.

Crews goals for the game were:

To  change students' perspectives on education,

To inspire students to be great,

To expand students' reading skills,  and

In order to simulate the game for conference attendees, Crews had them first read passages from "The Eagles  That Thought They Were Chickens, " and from "Nightjohn", a novel about a slave who returned to slavery  in order to teach others like himself to read.

Crews  also emphasized the need for students to learn about ancient African kingdoms, which are routinely ignored by traditional history lessons.

Augusta Mann's session showed how getting physical can help students learn. She used what she identified as the five African and African American  teaching and learning patterns, which are ritual, rhythm, recitation,  repetition and relationships, to cement the text in attendees minds.

"You don't learn stiff," said Mann. "Every time you turn on a TV, you see black people performing. The basis of our culture is spirit."

Organizing the audience like a class, she divided them into two groups and had them perform skits of the story of Henry Box Brown, a man who literally shipped himself in a box to escape slavery.

Mann demonstrated her concept of "Dancing Definitions," by getting the group to memorize parts of the US Constitution, using the five learning patterns.

Like Crews, Mann emphasized that before she introduces US history she teaches what happened before slavery, specifically ancient African kingdoms.

Following a short debriefing session, many of the attendees pledged to make sure there would be more participants next year, saying they felt the conference had been very valuable.

One teacher noted that it would be particularly helpful for the cultural competency aspect of teacher  evaluations.

"I feel really prepared for my teacher evaluation next year now," she said.