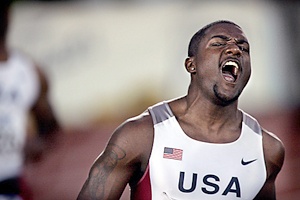 NEW YORK—Justin Gatlin's coach Trevor Graham said the U.S. Anti-Doping Agency was alerted to repeatedly test the star sprinter until "you find whatever they had put in his body."
Graham told ESPN.com last week that doping control officers were waiting for Gatlin when he returned to Raleigh, N.C., on April 24, two days after the Kansas Relays, where he tested positive for testosterone or other steroids after a relay race. He was grabbed again at the April 25-29 Penn Relays.
"They just kept on testing him," Graham told ESPN.com. "They tested him three times in one week."
Gatlin, the co-world record holder in the 100 meters, has said he didn't know how steroids got into his system, and his attorney has distanced the runner from Graham's comments.
Graham has been involved with at least a half-dozen athletes who have received drug suspensions. He has accused Oregon massage therapist Chris Whetstine of rubbing a steroid cream on Gatlin to trigger the positive test. Whetstine denies the allegations.
"Somehow, when we are going to doping control, Chris stopped Justin and is like, 'Let me massage him really quick, coach,' Graham told ESPN.com. "I was like, 'No, you ain't got to massage it, man. ... He kept coming at Justin. 'Let me massage it.' ... (Whetstine) pulled a tube out of his pocket, not out of his bag, and then he just squirted a tube on Justin's leg."
Gatlin went straight to a doping test after the application of that cream, Graham said.
"Someone probably called them, like they knew something was going to happen," Graham told ESPN.com. "Telling them to keep testing this guy until you find whatever they had put in his body."
— The Associated Press