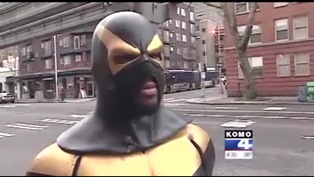 SEATTLE (AP) -- Instead of the bad guys, it was Seattle's most prolific self-styled superhero that ended up in handcuffs.

Police officers arrested the 23-year-old man who calls himself Phoenix Jones early Sunday after he was accused of assaulting several people with pepper spray. He was booked in county jail on four counts of assault, with arraignment set for Thursday, police said Monday.

"Our message has been the same from the beginning, if you see something that warrants calling 911, call 911," said Seattle police spokesman Det. Mark Jamieson. "Just because he's dressed up in costume, it doesn't mean he's in special consideration or above the law. You can't go around pepper spraying people because you think they are fighting."

But Jones, who wears a black mask with yellow stripes and a bulging muscle bodysuit, said he was only trying to stop a street brawl.

In capital letters, Jones wrote on his Facebook page to say he wouldn't "ever assault or hurt another person if they were not causing harm to another human being." He also released a video shot during the alleged assault.

The footage goes on to show Jones breaking up the group. Then a woman screams at him, hitting him with her high-heel shoes. Jones appears to be holding his pepper spray canister. Moments later a BMW car appears and speeds away on the street, almost hitting an unidentified man. Jones chases after the car to get the license number. A person with Jones is heard calling 911 to report a hit-and-run.

Jones and his followers then approach the rest of the group down the block. A woman screams at them to "stay away." Another woman runs up to Jones and hits him, screaming at him, "You sprayed (expletive) pepper spray in my eye!"

Two men in the group approach Jones, who then appears to pepper spray them.

Jones has been the most public face of a group of vigilante crime stoppers to show up in Seattle in the last couple of years. His exploits have garnered much media attention, and he's had a camera crew trailing him in recent months.

Peter Tangen, a volunteer spokesman for Jones, said Monday that police didn't have any interest in the alleged hit-and-run, but rather have an agenda against the masked crime fighter.

"They're on a mission to stop Phoenix Jones from what he's doing, which is legal," Tangen said.

Jones told KIRO FM's Ron and Don Show that police took his suit, boots and mask. He added that he hasn't had problems with the Seattle police department, but that a few officers have a "grudge" against him. Jones said he's got a backup suit.

"I should be on patrol later tonight," he said.

On the police report, the officer wrote that Jones "has had a history of injecting himself in these incidents. Recently there have been increased reports of citizens being pepper sprayed by (Jones) and his group."

The report goes on to say that although Jones "has been advised to observe and report incidents to 911, he continues to try to resolve things on his own."

On his Facebook page, Jones has nearly 4,400 friends, and says that he's married to a woman with the name PurpleReign, another masked vigilante.

Police weren't buying his Phoenix Jones handle, however. He was booked under Benjamin John Francis Fodor.

Manuel Valdes can be reached at http://twitter.com/ByManuelValdes .