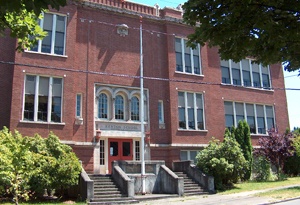 De La Salle North Catholic High School — a North Portland institution that has bucked trends with a rigorous academic program and a demanding on-the-job internship requirement – is seeing its perseverance pay off. The school reached an arrangement with Portland Public Schools to relocate to the empty Kenton Elementary School Building.
"It's been about a year that we've been negotiating (for the building)," said De La Salle President Matt Powell. "So we're really excited to have closed the deal."
Powell said the school's new campus will offer a number of distinct advantages over its original location, a Catholic church complex on North Delaware Avenue that it was leasing from Holy Cross Parish.
"We've outgrown our facility," Powell said. "We were going to mount a campaign to build out our campus, but we weren't able to do that. With the Portland Archdiocese in bankruptcy, it prevented us from making long-term changes to that property. So this deal with Portland Public Schools really came at the right time."
The Kenton site, at 7528 N. Fenwick Ave., offers all the amenities associated with a typical school: a gym, library, athletic fields, laboratory space — at about half the cost of the planned expansion of the school's current site, Powell said. He is especially excited about the site's auditorium and theatre facilities, which will help De La Salle North expand its popular drama and choral programs.
The school plans to make several improvements to the Kenton site, he added.
"The space is there; we just need to do some remodeling," he said.
Among the planned improvements is the construction of a new "high school type" gym, Powell said. He added that HSBC Corp., an international banking company, awarded the school a grant that it will use to renovate the Kenton library and to add a computer lab and media center.
On Aug. 23, he said, the HSBC Corp is sending 200 employees to the Kenton side to provide free manual labor, from painting and demolition to cleanup.
HSBC is also a new member of the growing pool of De La Salle North's corporate sponsors, which form half of the corporate internship program that distinguishes the school. Each De La Salle North student spends a significant chunk of the school week at work in the offices of one of the school's corporate or nonprofit partners.
In exchange for tuition help, the students learn workplace etiquette, job skills, dedication and all the other facets of professional life. Four students — one from each high school year — team up to share each full-time position. The school runs an extended school year to ensure that students get enough classroom time to make up for time spent on the job.
"It made me want to work harder at school because of the successful people I saw around me," said Datriona Spears, a member of De La Salle North's 2005 graduating class, the school's first.
"I met the CEO and the president of my company and one was a woman. I decided I wanted to be like her — I wanted to own my own company," Spears said. "It makes me strive more and have more motivation when I see people I want to be like. And it makes your resume look awesome."
Powell said the relocation has already generated increased interest in the internship program among local business and nonprofit organizations.
"We're going to really be able to do some true community partnerships, with child advocacy organizations, neighborhood groups and the like," he said.
But perhaps the biggest advantage to the new building is the space it provides for increased enrollment. The school opened in 2001 with 71 ninth-graders and now has a total student population of around 200. Demand has so far outstripped available space, something that will be remedied by the relocation, Powell said.
"Our goal is 300 students, and we can accommodate all of them there," he said. "And Kenton offers us great flexibility in terms of location — it's right on the light rail line, and most of our kids come to school by way of public transportation.
"It's really a great place for us to grow into and extend our program," Powell said.
For more information, visit www.delasallenorth.org.