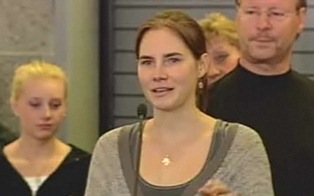 SEATTLE (AP) -- Amanda Knox hasn't slept much since arriving back in Seattle after four years in an Italian prison, her father said on Thursday.

"I think she's literally running on adrenalin right now, because she hasn't slept very much - hardly at all. I think she's so joyful to be around her family and kind of reconnect with everybody," Curt Knox to KOMO Radio.

She's taking things one day at a time.

"It is going to take some time before we figure out what that new normal will be," he said.

The 24-year-old former University of Washington student and her family left Italy immediately after an appeals court threw out her conviction in the slaying of her British roommate Meredith Kercher in Perugia, where both were studying abroad.

"It has become really almost her first language since she's been in prison so long, but she seems to be moving to English," he said.

She was overwhelmed by her release from prison and the large number of reporters who awaited her arrival at Sea-Tac Airport on Tuesday. The family has not yet decided on whether to seek counseling for her.

"We're going to take it on a day-by-day basis and see how she continues to react and kind of blend back in to just being a regular person outside of prison. It's a big concern of mine if there's any traumatic circumstances that arise later on," he said.

One of the things Amanda Knox said she would do when she got out of prison was to lay in the grass.

"She has and it's been very nice to watch her do it," he said. "It's the little things that she hasn't had a chance to do in the last four years that really make it worthwhile and really kind of get her reconnected again."