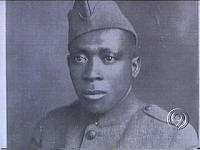 Oregon Sens. Ron Wyden and Jeff Merkeley have sent a letter to the U.S. Secretary of Defense Leon Panetta, asking him to award the Medal of Honor to WWI war hero Henry Lincoln Johnson. They have also asked Panetta to speed up the process, which normally takes two years.  For Defense Sec. Panetta to be reviewing the case suggests that Army Sec. McHugh already has reviewed and approved the award.

"For nearly 100 years, our nation has failed to properly recognize the heroic actions of Sergeant Henry Lincoln Johnson," the letter reads. "We are writing to ask you to take the opportunity to correct this injustice by personally reviewing the new evidence that has been submitted to support awarding Sergeant Johnson the Medal of Honor. We also ask that you expedite the review process, which we understand can normally take more than two years. After reviewing the evidence and

learning more about Sergeant Johnson's story, we believe that you will agree that America has already waited far too long to properly honor one of its most distinguished heroes."


According to President Roosevelt, Sgt. Henry Lincoln Johnson was one of the five bravest men to serve in the war. Yet, like many of his companions in the Harlem Hellfighters, he was passed over for recognition in the United States, even though France recognized Johnson with its highest military honor: The Croix de Guerre with gold palm.

Wyden and Merkeley's letter is the latest effort in a long campaign to secure America's highest honor for Johnson.  At the time, recognition was denied him solely because he was Black during the time of Jim Crow, segregation and a powerful Ku Klux Klan.

In the last two years, the campaign has gained momentum, thanks to the efforts of campaigners including Portland City Commissioner Nick Fish, New York Sen. Charles Schumer, former New York State Rep. Joe DioGuardi and veterans groups. Schumer's staff this Spring unearthed new evidence that showed Johnson's bravery was recognized at the time by his commanding officers and also by an independent evaluator who investigated the case.