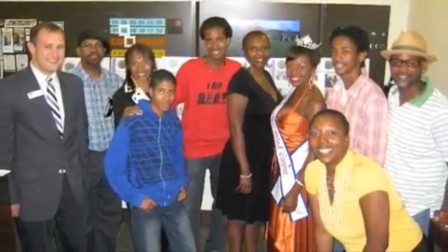 Celebrating 10 years of services to youth, Reaching and Empowering All People (REAP) holds a fundraising gala Thursday, Sept. 29, at the Oregon Convention Center.

Fashioned as a dinner theater, the event features a play called "C-Student," performed by young people. Written by REAP staffer and artist Sunshine Dixon, the show is produced in partnership with the BaseRoots Theatre Company.

"This celebration is going to showcase the solution around supporting students to effectively identify the leadership potential of young adults," says Executive Director Mark Jackson. "If given the proper support and belief system – that what they have to offer has validation and capital -- we believe we can turn individuals around and accelerate the change that we all envision for our young people, because they're our future. It's not the idea of just their future, they represent our future," Jackson says.

One of the premiere youth empowerment organizations in the metro area, REAP's programs include:

-- The annual Challenge Conference and Challenge Camp, with activities, motivational speakers (including the kids themselves) and community leaders.

-- Solutions leadership diversity program, in which kids are assigned individual mentors from local institutions such as Portland State University, Nike, Intel, local government agencies and companies; their parents are strongly networked into the program through Parents 4 Success.

-- The Reflections drop-out prevention program, which puts students on in-school suspension into a structured support network providing tutoring, classwork, and creation of a "success plan" focused on academic achievement and school safety. Reap says 75 percent of the students in Reflections do not go on to repeated referrals;

Hundreds of students have passed through REAP's leadership programs, and thousands more have participated in talks, forums and events led by REAP's student leaders.

"We have found that the solution is young people – they're not the problem, they're the solution," Jackson says. "So this 10th year anniversary celebration is going to showcase what we've done to bring students to the table – not as mentees, but as decision makers."

"What you need is in the seed – so no tree ever went to Home Depot and bought leaves and fruit," says Sunshine Dixon. "Everything was in the seed, but what is in the earth around that seed can limit what's produced by it. If the wrong things are in the soil then you don't see the potential and the fruit is weakened.

Jackson says there's an "obvious skills gap" – but it's not so much a question of training kids with skills for the 21st century. "We need to think about the 25th century," he said. "We need to start thinking beyond these old paradigms where people are refusing to shift, and really embrace new ideas, new partnerships, new concepts. And be able to get behind organizations that have demonstrated long-term success and organizations that provide a fresh, innovative approach to engaging and accelerating change in the young people."

The REAP 10th Year Anniversary Celebration is Thursday Sept. 29, at the Oregon Convention Center Portland Ballroom, with no-host bar and silent auction starting at 5:30 p.m., and theater/dinner program at 6:30 p.m.

For more information about REAP go to www.reapusa.org .