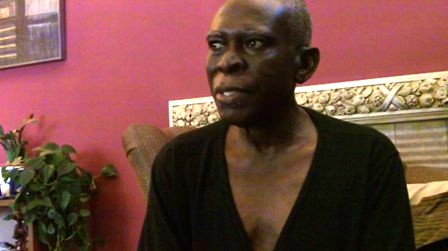 Celebrating the 75th birthday of Oregon's father of African music – and the 25th anniversary of his arts organization Homowo – master drummer Obo Addy presides over a musical extravaganza Saturday, Sept. 24 at the Emanuel Hospital atrium.

(Watch a video of Obo Addy and Okropong here)

Addy has struggled against cancer for years; his wife Susan says that the disease has returned, and that Saturday's show may be his last public concert.

On a recent day, Addy shared stories about his life since immigrating to Portland from Ghana to play High Life music – many say he was the first African drummer in Oregon and an originator of the genre now called World Beat.

But perhaps even more importantly, as a performer with Young Audiences, he and his band have touched the lives of thousands and thousands of kids.

"I go to Safeway, I write a check and give it to the girl, and she says, 'Oh, Obo Addy. You came to my school when I was in third grade! And you danced with my teacher."

Addy says he came to the Northwest to bring African music and culture to a region that sorely needed diversity. 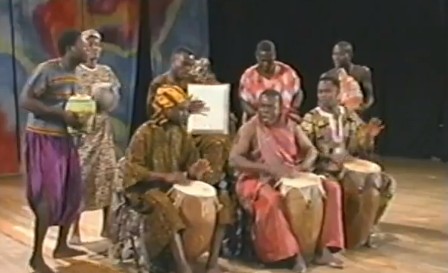 But even in the African American community, back in the early 1970s, it was a tough sell to find people who would form a group with him because so few people here had ever heard real African music.

So he brought people from Ghana to Oregon, and they began teaching drumming and dance. Early on, Addy says, they decided to focus their efforts on children – and within a few years Addy and his wife Susan had built a huge community.

Key to that success was Addy's relationship with jazz great Thara Memory; the two first met back in 1978.

"Thara called me and said, 'Somebody gave me your number, and – are you really a master drummer? The reason why I'm asking you this is that there's so many Africans, so all the Americans think all Africans are master drummers. There are some Africans who are not drummers, but they say they are, and people don't know. They think if they make the drums sound louder then they're really a master drummer.'

"And I said, 'I don't call myself a master drummer because I have four older brothers at home who are the master drummers, and they can play anything on the drums.'

Memory invited Addy over to the Musicians' Union Hall to jam with his Big Band.

"So I went there, and he called out a song and said, 'Have you heard it before?' and I said no. And he said, 'You look like you're sensitive enough with music, and I said, 'I'll try my best.'"

They rehearsed more than 15 songs, Addy says, and then Memory asked him if he had a car; the answer was no.

Addy recalls his first days with Young Audiences and also with his ensembles Okropong and Kukrudu, when the crowds at his shows were there out of curiosity because they had no idea what to expect.

"Some of them thought it was wonderful to hear us play; some of them didn't stay for a long time," he says. Schools that stand out for their positive response to the music include Ainsworth Elementary School, Central Catholic High School and Catlin Gabel.

"We started to go to all the middle schools, the high schools and the elementary schools; then we started going to Seattle."

Eventually he and his performing troupes toured all over the world, and to every corner of Oregon; one gig that stands out was a show in a rural Oregon town called Halfway.

"And I said, maybe I'll go for a glass of wine. I didn't think anything about it. When I went into the motel bar there were about six people playing pool, and everybody raised up their heads and looked at me. And the guy at the counter said, 'Uh oh, what do we got here?'

"And I put a smile on my face and said, 'Could I have a glass of wine? And the barman said, 'We don't have any wine. We only have this bottle of wine, and we've had it about four years.'

The barman poured him a glass of beer but when Addy went to pay, the barman refused his money.

"So I drank the beer and went back to the room – I was so scared," Addy says.

"I think everybody in the town came to that concert, including those guys. They were hearing the music like country music, because of the guitar styling. People started clapping for us, and it was a long time before they stopped.

"When we finished the concert people were shaking our hands and they were hugging us.

"And I was speechless."

For more information on purchasing tickets to the Obo Addy benefit gala call 503-288-3025 or go to www.oboaddylegacyproject.org.