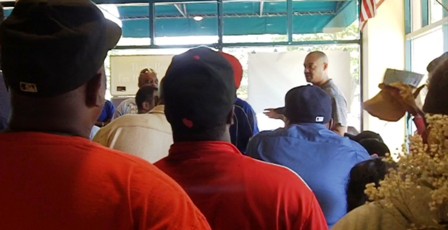 About 100 prospective longshore workers thronged Reflections Coffee and Books Tuesday morning at 11 sharp to make sure their application cards were filled in correctly for the Portland Maritime Association "casual worker" jobs lottery.

Members of the African American Longshoreman Coalition members, rank-and-filers of the ILWU Local 8 and Local 40 from Portland, held the event on their own time, staffing the help table on their lunch hour, then trading off with other workers scheduled to come down, in turn, when their lunch hour arrived.

The effort by the AALC to help others make sure their job bids are filled out and submitted correctly comes amidst a long struggle against discrimination on the waterfront dating back almost 60 years. This is the very reason the AALC was formed back in 1993-94; the name of the group before then was the Black, Minority and Longshore Coalition.

"It's a big deal because most of what we've been talking about locally is the opportunity for Blacks to have free access to the economic development of Oregon," said Portland City Council candidate Teressa Raiford, who attended the Tuesday help session at Reflections.

"A lot of these guys who are here now – we're talking about past generations of family members who were also longshoremen but this generation has been kept out of that pool."

African Americans have filed lawsuits and grievances alleging exclusion and unfair hiring practices by longshoremen's unions down the stretch of the West Coast, including the Portland waterfront.

A key legal decision in 1964 forced the first desegregation of the International Longshore Workers Union Local 8, allowing 50 African American workers to be hired.

In Portland, critics charge, unfair practices continued until a group of six casual workers filed an Equal Employment Opportunity Complaint charging racial discrimination in 1995. Reforms were enacted that eventually brought five of the six into the union, but African American workers have repeatedly charged that the PMA and the ILWU continue to keep jobs away from women and workers of color -- Black women in particular, organizers say.

A groundbreaking series of articles in the late 1990s by Seattle Times business reporter Stanley Holmes uncovered rampant problems; by 1997, eight discrimination lawsuits were pending against the Seattle longshore workers' union and the PMA.

"Several Seattle and Tacoma port commissioners say they are concerned about dockworker allegations of racial and gender discrimination on the waterfront, but say they have no jurisdiction over the Longshoremen's Union or the maritime association that leases the docks from the ports," Holmes wrote.

In 1998, one of the Seattle-area suits against the ILWU, the PMA and an array of union locals – which, Holmes reported, alleged

Black and Hispanic workers were "passed over for job assignments, subjected to racial slurs and jokes, physically assaulted and, after the suit was filed 18 months ago, victimized by retaliatory acts" -- was settled out of court.

By 2006 the African American Longshore Coalition attempted reforms from inside the union – but, some say, without result.

A spokesman for the Tuesday help group kicked off the session with a few words about the need for more longshore workers of color, and the need to fill out the cards exactly right -- without any errors.

"The reason we brought you here today is – you don't have any better opportunity than anybody else, but you do have the opportunity to fill out the card right and make sure you're in the drawing, and you may possibly get a job as a longshoreman," he told the boisterous crowd.

The Skanner News was not able to identify the volunteer by press time because the number of interested applicants at the coffee shop was so large it was impossible to get near the table. The throng surged out as far as the parking lot and promised to keep flowing until the event shut down at 3 p.m.

Wednesday is the deadline for sending in "interest cards," each of which – if filled out properly and submitted on time – will be entered into a series of lotteries from which a roster of "casual worker" hires will be made.

These "casual workers," who are non-union laborers without any medical benefits or job perks, are the pool of workers from which a Portland International Longshore Workers Union Local 8 committee periodically selects new union members when opportunities open up.

"There's not many brothers with us down there at the Port of Portland," the volunteer said. "So we have 500 longshoremen and maybe 25-30 African American or mixed race etcetera.

"So we'd like to see more of you guys down there working with us and that's why we organized this on our own time."

"The problem is that when you look at that economic system in the breakdown of this city, people are tending to get the jobs that their fathers have taught them," Raiford said Tuesday at Reflections. "So without that opportunity we know that we have a lot of unemployed people, we have a lot of kids that aren't graduating from high school, we have a lot of families that are divided.

Raiford noted that most of the families in Oregon today are descendants of longshore workers who came to Oregon at the beginning of World War II.

"All of our families, including mine, came to Portland with the longshoreman jobs almost 100 years ago, so it shouldn't be this hard to get them into these types of opportunities, but it is," she said. "They're not being fair about having access for everyone.

"And it seems like such a small thing when you're looking to get a job and the only reason you're not getting it is because of an initial on your card or it's the wrong size," Raiford said. "One of the complaints that we just heard about was that the people who were sending the cards out for people to apply sent the wrong-sized cards."

Hope for the Future 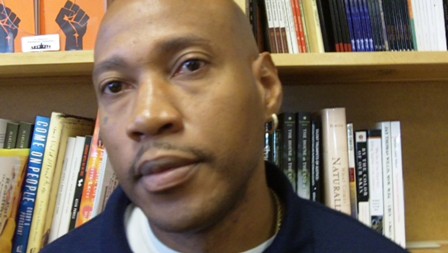 Floyd Nathaniel Booker III is interested in a longshore job, and he stood as number 53 on the list to get his application card checked for errors.

"I am here to fill out an application for the longshoremen, and from what I understand there's an opportunity for all of us, for Afro-Americans, minorities, to be able to take part in this opportunity that's available," he said.

"A lot of these things haven't been available for us in the past, so I'm taking advantage, and all these other people are here too, it shows that there's a lot of people out here that do want to work, and they do want jobs, and they are willing to take advantage of the opportunities that are available to them."

"We're going to fill out these cards right here and when we're done I'm going to take them to the post office today and make sure they get postmarked today, and get them turned in," said the volunteer at the help table.

"That's why we gathered you down here, we're happy to see you here."