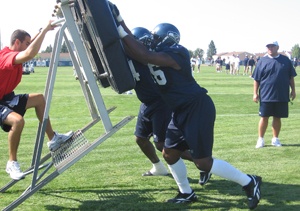 It's that time again. The Seattle Seahawks opened training camp Saturday at Eastern Washington University in Cheney. At windy Woodward Field, the Seahawks took that first step on the road back to the Super Bowl.
After the painful loss to the Pittsburgh Steelers in Super Bowl XL, the Seahawks are preparing to defend their National Football Conference title. First-round draft pick Kelly Jennings, who will be battling for the left cornerback slot with Kelly Herndon, reported to camp Sunday afternoon after missing the team's first three practices. It was the first time he had taken part in team drills since a mini-camp in mid-June. Jennings signed a five-year contract worth more than $7 million. The team's second-round draft pick, Darryl Tapp, signed a four-year deal and reported to camp on time.
Jennings, a rookie from the University of Miami, is expected to push Herndon hard for his starting position. Herndon, a fifth-year pro, has experience, knows the team's defensive scheme and is healthy and ready to start after undergoing arthroscopic knee surgery during the off-season.
The Seahawks have added several new players they hope will make a difference. After losing all-pro left guard Steve Hutchinson, wide receiver Joe Jurevicius and free safety Marquand Manuel to free agency, the Seahawks added former Pro Bowl linebacker Julian Patterson, defensive tackle Russell Davis and wide receiver Nate Burleson, a Seattle native.
"There's a good feeling on the team and they're just building on it," coach Mike Holmgren said. "You can get better and I expect everyone on the team to do just that." 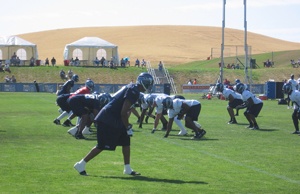 From the players to the coaches, Holmgren said, "Everyone in this room must get better."
And that includes the first Seahawk to be voted the league's most valuable player, running back Shaun Alexander.
"I think that last year we set a goal to shock everybody and show everybody that we were ready to go to the Super Bowl … and I think this year more people believe it." Alexander said. "With that, comes more work you have to put into it."
After suffering life-threatening head injuries outside a nightclub last season, free safety Ken Hamlin is healthy and ready to get back on the field.
"I'm just ready to play; this is just another step in getting back to practice," Hamlin said. "I know me, how I feel, I'm a competitor; to be back with my teammates physically doesn't feel any different."
Several players have been placed on the physically unable to perform list after failing their physicals: defensive linemen Darrell Wright, Grant Winstrom, Marcus Tubbs, Joe Tafoya and Rocky Bernard; tight end Jerramy Stevens; defensive back Jordan Babineaux; and wide receiver Darrell Jackson. All are expected back by the second or third preseason game.
Jackson is a surprise, since Holmgren thought he would be ready to practice by now after having knee surgery last season and another procedure following the Super Bowl.
"It is a little concerning, since he had surgery a long time ago. Typically on that type of surgery, (his recovery) should be a little farther along," Holmgren said. "It's a little too early to have major concern over it, but I'm hopeful he will be able to come back and practice pretty quickly."
Burleson, who attended Seattle's O'Dea High School, said the team had a "great opportunity to go out there and do something special. I think were working hard, working for the same common goal, which is a good thing. You have a lot of guys who've put their ego aside, put the dollar signs aside and want to do something big.
"I just want to make plays when afforded the opportunity and do whatever I can to help make the team successful." Burleson added.
The remaining tickets for the team's eight-regular season home games sold out within 45 minutes. A limited number of tickets are still available for the preseason games against the Oakland Raiders and Dallas Cowboys.
Saturday, the Seahawks will hold an intra squad scrimmage from 2 to 3:40 p.m. at Eastern Washington University's Woodward Field.