Contractors gathered at the Marriot Residence Inn Wednesday to learn about plans for building the new Sellwood Bridge. Projected to cost an estimated $270 million, 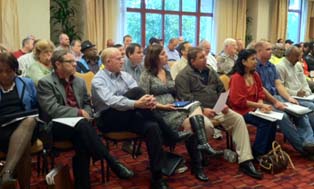 the new structure will span the Willamette at the site of the existing bridge and link to Highway 43. Construction of a detour bridge could start in December, with construction of the new bridge set for July 2012.

In July, Multnomah County awarded the construction manager/general contractor contract to 'Slayden/ Sundt, A Joint Venture'. Slayden Construction Group is based in Stayton, Ore., and Sundt Construction Inc. is based in Tempe, Ariz. Both have worked on large highway projects in their home states. As a team, they completed the $150 million I-5 Willamette River Bridge Project in Eugene.

Steve Schmitt, the project manager, laid out the timeline and scope of the work and told contractors the team will set ambitious safety, sustainability and diversity goals.

"Our apprenticeship goals are 20 percent by craft," he said. "Our diversity goals are 14 percent women and 20 percent minorities."

Larry Gescher explained the construction contract, which must be completed online. Technical assistance and mentorship for smaller firms will be a priority, he said. 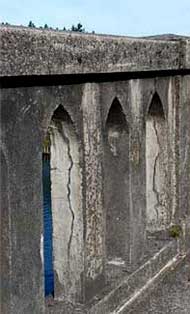 "We're taking bits and pieces of the job and dividing it up. Every step we go through as a prime, we're going to walk them through that so they can become general contractors too," he said. "It'll be a baptism by fire, but we're going to teach them."

The contract will require open-shop firms to hire union labor as well as non-union. However, certified Disadvantaged, Minority, Women and Emerging Small Businesses (DMWESB's) will be exempt. Other firms will have to follow a formula. Open-shop firms hiring laborers and masons, for example, can hire 3 non-union workers, then 2 union workers, then one for one. The ratio for ironworkers and carpenters starts with five to two, then one to one.

"ODOT has hard goals for African Americans (4 percent) and Asians, but we plan on well exceeding that."

Project financial manager Kevin Burnett explained the pre-qualification process for contractors who want to join the construction team. He said the general contractor will provide the surety for small firms. Sub-contractors will pre-qualify by filling out an online application, which will ask similar questions to a surety. A completely separate organization, SubQual LLC, has been created to qualify subcontractors, and all financial information submitted will remain confidential.

"The information we accumulate won't be seen by anyone at Sundt," Burnett said. "We've been doing this for 12 years and we've had zero leaks. We keep that really confidential."

He said Slayden/Sundt are open to sub contractors taking on larger jobs than they have done in the past, but would consider a number of factors, such as the complexity of the job and the time frame required, before awarding contracts.

"The one thing I want to stress to you is that we want our subs to make money," Burnett said. "If our subs don't make money, we're not in business."

However, he said the team would think carefully before awarding a million dollar contract to a firm with a track record of $100,000 jobs.

"We are taking a team approach. Think of it like a football team. If the left tackle doesn't do his job then the quarterback gets blind-sided. We want to make sure no-one on our team gets blindsided."

Burnett encouraged subcontractors to apply for anything that fit their skillset and capacity. "We do a lot of work around the Northwest," he said. "And we'd love to have you in our database."

The meeting was the first to announce details of the contracting process, said Slayden's Jennifer Erickson. "We'll have more meetings when we start putting out bid packages," she said. "If  a contractor has a question about bidding, apprenticeships or the schedule, they can call or email me." [email protected] or 503-769-1969