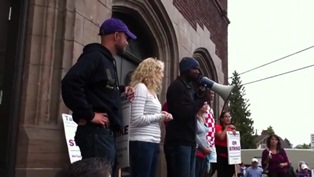 TACOMA, Wash. (AP) -- Teachers in Washington state's third-largest school district are defying a judge's order and will continue to strike, forcing the cancellation of classes.

A Superior Court judge on Wednesday issued an injunction ordering the teachers back to the classroom. But union leaders say the court order only applies to its leaders.

The teachers walked out over issues that include pay and how teachers are transferred. About 28,000 students are being kept at home during the strike.

A judge on Wednesday ordered teachers in Washington state's third-largest school district to return to work and end a two-day walkout over issues that include pay and how teachers are transferred.

The Tacoma Education Association told teachers to report early Thursday to their regular picket line locations to get additional information about the court hearing and "decide how to proceed," union spokesman Rich Wood said Wednesday night.

Union leaders do not plan to offer any recommendations to the nearly 1,900 teachers who began their walkout Tuesday, Wood said.

A district spokesman did not immediately return a call for comment Wednesday night.

Superintendent Art Jarvis said earlier the two-hour delay in Thursday's schedule would give school officials time to change plans if need be.

Pierce County Superior Court Judge Bryan Chushcoff also ordered both the union and the school district to return to collective bargaining as soon as possible. A bargaining session was scheduled for Thursday afternoon, Wood said.

"I want you to all talk, even if I have to put you in a phone booth," the judge said. Chushcoff scheduled a hearing Friday to determine whether the union and the district are complying with his order.

After the ruling, union President Andy Coons said the strike was over and promised to try to inform his membership of the developments. Still, Coons said he's no dictator.

He seemed to acknowledge that teachers could still refuse to return to class, saying, "We live in a free country. People can make their choice."

Several teachers boasted to reporters that they would not follow the judge's order, but union leadership and others said their main goal was to get the district back to the bargaining table and negotiating in good faith.

Brent Gaspaire, a history and government teacher at Lincoln High School, said, "I feel as though I have the First Amendment on my side. It's the judge's job to interpret the Constitution, but I think I'm protected."

The judge said earlier that the law is unclear over whether public employees have the right to strike in Washington - but he nevertheless said he would issue a temporary restraining order against the picketing teachers in Tacoma.

In Washington state, only the Seattle and Spokane school districts are larger.

The judge's ruling suspending the strike is temporary. A hearing on an injunction to permanently stop the strike is scheduled for Sept. 27.

School district lawyer Shannon McMinimee told the court that 19 judges had ruled teacher strikes illegal since 1976. Tyler Firkins, a lawyer for the union, said that blocking the strike would inject the court into the bargaining.

Teachers hit the picket lines Tuesday after voting overwhelmingly Monday night to strike over issues that include teacher pay, class size and the way the district's teachers are transferred and reassigned. Tacoma teachers had been working without a contract since school started Sept. 1. After weekend contract negotiations failed to result in an agreement, 87 percent of the union's membership voted to walk out.

Tacoma teachers earned an average salary of $63,793 during the last school year, according to the district. They are the best-paid teachers in Pierce County and about the fifth-highest paid among the state's largest districts, behind teachers in Everett, Northshore, Seattle and Bellevue, according to state data.

The Legislature included in its state budget a 1.9 percent cut in teacher pay but left it up to school districts to figure out how to save that money. Some districts have made cuts elsewhere, some have cut teacher pay, and others have worked out compromises with their local teachers' union.