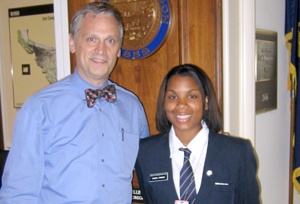 WASHINGTON—De La Salle North Catholic High School Student Nakera Johnson finished out her monthlong duties as a congressional page in Washington D.C. last week, and returns to Portland with a perspective on how the nation's laws are made.
Johnson was nominated by U.S. Rep. Earl Blumenauer, D-Ore., and worked in his office in the U.S. Capitol.
"I was very pleased to have Nakera representing my office and the Third Congressional District of Oregon this summer," said Blumenauer. "I am confident she served the Congress well and hope she enjoyed this unique opportunity."
Johnson, the daughter of Kalavina and Nyla Johnson of Northeast Portland, recently completed her sophomore year at De La Salle North Catholic High School where she has a 3.8 grade point average. She is a member of St. Jude Church and Brother and Sister's Keepers' Focus Group and volunteers with Loaves & Fishes, the Salvation Army and Me'Rae's Hair Salon. She also worked as an office assistant at the law firm of Schwabe, Williamson & Wyatt.
As a congressional page, Johnson lived in the official Page Residence Hall near the Capitol in Washington, D.C. She worked on the floor of the U.S. House of Representatives during the time when Congress was in session, and she had a front-row seat for political debates, including the reauthorization of the Voting Rights Act. Her internship came when Congress was in session nearly every weekday of the month.
Although pages have helped out lawmakers since the first days of the Republic, Congress instituted the tradition of nominating pages for appointment in 1855. Members of Congress may nominate pages only upon invitation of their party's leadership. Blumenauer has been invited to nominate pages three times during his tenure in Congress.