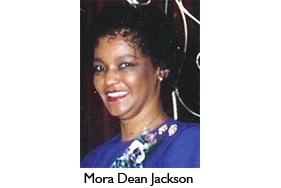 Mora Dean Jackson, the second of four children, was born on July 30, 1939, in Morton, Miss. to the late Robert Allen and Jossie Lee Walden. She died July 22 after a day spent with close family and friends.
Mora moved to Portland as a young girl. She attended Boise Elementary School and graduated from Jefferson High School in 1958. She attended Portland Community College and later worked at Pacific NW Bell for nearly 30 years.
Mora dedicated herself to raising her children with honorable values and a good work ethic. Her way of life showed that she was a woman of great dignity and pride. On her good days, and even through her days of illness, this dignity and pride were apparent in her mannerisms and bearing.
Mora attended Fellowship Missionary Baptist Church, where she became a member in 1991. She served on the Usher Board and sang in the choir. Mora attended faithfully until she became ill and was no longer able to serve.
When Mora's health began to fail her, her daughter, Lanita, became her mothers live-in caregiver. Mora's daughter, Crystal, also careed for her mother.
Above all, Mora loved spending time with family. This she did one last time this summer, as many of her family members came together and enjoyed a barbeque. Mora ate, laughed and even wanted to get into the swimming pool. After a full day, she decided to go in to rest, and it was there that she died.
Preceding her in death were her father and mother, Robert Allen and Jossie Lee Walden and a brother, Tyler Tyrone Walden. She is survived by: daughters Lanita J. Lockhart, Crystal Lockhart-Phillips (Edward) and Kenita Mason;  brother, Curnel Allen Walden (Willie); sister, Mary Lee Hubbard; godchildren Angela Greer, Vernetta Lincoln, Dana Washington and Elmer and Ladeana Yarborough; grandchildren Javondré Cole, Emon Hillman, Emogené Hillman and Shawntaé Rankins; great-grandchild, JaBrandon King; and a host of nieces, nephews, relatives and friends.