Johnell Bell Hired As Trimet Director of Equity and Diversity 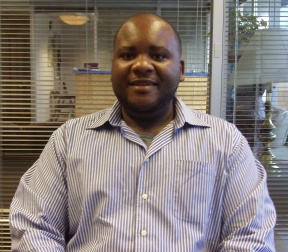 TriMet's new Director of Equity and Diversity Johnell Bell has worked his way up from the grassroots: as a Benson High School student he served on the Portland Public Schools Board; from there he became a coordinator of Multnomah County's federally-subsidized summer food program; then a policy intern for former Gov. Ted Kulongoski; next, a community engagement project manager for former Mayor Tom Potter; a community liaison for Multnomah County Chair Ted Wheeler's office; a policy analyst for the Multnomah County Health Department Health Equity Initiative; and most recently, a field representative for U.S. Sen. Jeff Merkley. Now at TriMet, Bell takes the reins from former equity chief Bruce Watts. Bell is a member of the Black Executives Network and the Urban League of Portland. Along with Charles McGee Jr., he co-founded the Black Parent Initiative. Here Bell talks about his vision for a transportation equity advisory group at TriMet, as well as hot-button issues including public input on fare increases, North Williams Avenue transportation planning, and TriMet's record of working with minority contractors in construction projects.

The Skanner News: Tell us about your new job.

Johnell Bell: First of all it occurred to me the first time I was ever interviewed by you. It was 9 years ago when I joined the school board. 'New Kid on the Block,' it said. I remember that.

My new role is Director of Diversity and TriMet Equity. The words essentially mean this: the general manager has pretty much put me on charge to do a couple things. One is to continue to build on the great work TriMet has already started with being responsive to transit-dependent populations. How are we engaging communities most impacted by the decisions being made? Secondly, how are our internal efforts at hiring? I'm looking at hiring processes, the make-up of our workforce opportunities for contracting on the DBE (Disadvantaged Business Enterprise) side as well as the General Fund side. How are we really ensuring that those opportunities are open to communities of color and low-income communities?

And then thirdly is to continue to build with our external partners. City of Portland is doing a lot of great work around equity; Metro is doing a lot of great work. In fact TriMet, in partnership with Metro, and a number of community-based organizations, is in the process of working on a planning grant through HUD (the U.S. Department of Housing and Urban Development) – a sustainable community planning grant – and essentially it's how you create an equity lens when you're looking at future planning for this region.

So one of the things that the consortium of local governments is thinking about doing is, as we look at the 2040 urban growth plan, how do we use that as a tool to really study our inequities in this region? And that means really studying where our transit dollars are being allocated, where sidewalk improvements are needed, and the emphasis really on this grant is looking at the connection to housing. Housing's a big issue, but in reality our community will never be able to grapple with the housing issue until we grapple with the job issues.

So my vision, my role is to do what I've always done – which is being sure there are opportunities for communities that may have never felt they had strong connection to TriMet. They do now.

TSN: Here in North Portland people have been up in arms about proposed changes to the traffic systems on North Williams Avenue. We've seen a lot of reader comments about how transportation and race should be kept separate. Can you talk a little bit about Civil Rights and transportation?

Bell: There are a couple things to keep in mind. When we're looking at transportation planning, at least from a federal lens, race is always considered. Title VI of the 1964 Civil Rights Act specifically talks about persons of color being a protected class. And so essentially when federal transit agencies are receiving money from the federal government they must abide by Title VI guidelines. One of the Title VI guidelines is around the DBE – contracting to Disadvantaged Business Enterprise, that's actually mandated by the federal government.

Another one is looking at both the burdens as well as the benefits of communities typically adversely impacted – communities of color, etc. And so you can't necessarily divide race and transportation. I think the real question is – where do we go as a community in bringing all the differing, varying voices together, those who are committed to pedestrian safety, those who are committed to bicycle access? How do we combine all these different groups together to come up with a common strategy that makes sense for us all? Because it's hard for me to believe we can't have a comprehensive strategy that both meets communities that are transit-dependent and the needs of those who want to have bicycle access.

I think unfortunately this conversation has been polarized for a variety of reasons, and also it's unearthing a lot of things relating to gentrification. But, you cannot divide the two – race and transportation -- I guess would me my answer.

TSN: There are many issues around TriMet's equity agenda, but what you're talking about contracting, I think a lot of people are not aware of what TriMet has done with that.

JB: That's a challenge for us too, that's something that I want to really work on. It needs to be more visible. One of the things that most agencies don't do well is promote the good things they've done. But when it comes to TriMet's DBE, Bruce Watts has done an excellent job of building that program. And frankly that's a nationally recognized program. That's the one that looks at contracting to essentially minority enterprises, creating opportunities for them to get contracts. But unfortunately I think a large sector of our community does not know that program exists, and that's an opportunity for us to promote the great things we do in terms of job creation, in terms of advancing the building of a lot of these smaller firms.

One of the things Bruce helped pioneer was breaking a lot of these things into smaller components, because as we know unless you're a large, large contractor you're not going to be able to bid on a whole job. So there are a lot of best practices to build on there. The question becomes now, how do we replicate that same kind of spirit on our general fund side, where we're looking at some of our professional services contracts? That's something that (TriMet General Manager) Neil McFarland is very, very interested in looking at.

TSN: Can you talk a little about how TriMet works with community organizations like OPAL, the rider equity group?

JB: I think that TriMet, like a lot of transit agencies across the country, is finding strategies to be more proactive with different communities. OPAL is an organization that certainly advocates on behalf of a constituency. One of the things that I will be doing in relation to communities of color as well as disengaged communities is creation of a transit equity advisory group. This is something that I talked a lot about in my interview panels and it's something that the general manager is excited about. Essentially a transit equity advisory group, while the scope is not totally defined, the way I envision it right now, would be a group of representatives from groups such as OPAL, the Urban League, and others, who have an active role in helping to influence decision-making when looking at those same difficult decisions as fares, and where buses are taken offline. This group would advise the general manager as well as advise the policy of the board, and internally to TriMet personnel -- the best thoughts of community in terms of what they need.

So that's one of the things I'm really excited about. We also have a lot of concerns in terms of the fare transfer hours, I don't necessarily have a lot of ideas about that – I'm only four weeks in. But I think it's important at least from my philosophy – you always bring community in to make these decisions. Always.

I would love for folks, if they have ideas, thoughts, concerns, to contact me. I'm 100 percent a resource. In fact you could put my email in there.