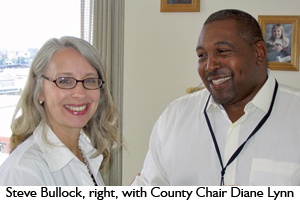 Steve Bullock is the new interim director of the Office of Emergency Management for Multnomah County. Bullock was appointed to the post by Multnomah County Chair Diane Linn.
Bullock holds a master's degree of business administration and worked for more than 10 years in public safety.
In the seven years he has worked for Multnomah County, Bullock has served as manager in the Business Services Office of the former Department of Community and Human Services, helped establish the county's 24-hour Mental Health Call Center, co-managed the Mental Health Division of the Department of County Human Services and served as chief operations officer of the Human Services Department.
For the past six months, Bullock has been assigned to the Office of Emergency Management, where he coordinated the office's daily operations and served as the county's liaison for the Portland Office of Emergency Management, state and regional emergency management officials and other agencies.
Bullock replaced Rob Fussell as interim director. Fussell returned full-time to his duties as Linn's chief of staff.
Linn has directed the county's human resources staff to begin a national recruiting search for a permanent director for the Office of Emergency Management. She asked county Sheriff Bernie Giusto, Commissioner Lisa Naito and county Chair-elect Ted Wheeler to serve on the interview panel.