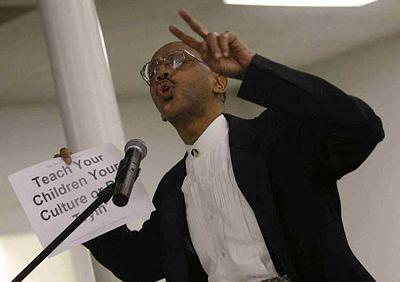 The Black Star Project is a Chicago-based educational reform organization founded 15 years ago by Phillip Jackson. Next week, the group's crowning glory – the Million Father March – is set to hit the high mark of actually bringing one million fathers into their children's schools, for the first time since the event began.

The idea is to encourage dads to personally escort their children to school on the first day. So far hundreds of thousands have taken up his call, moving the event out of the Black community and widening the circle to include schools and neighborhoods around the nation.

For 2011, Jackson has dramatically expanded the scope of his project to encourage entire communities to show up at their neighborhood schools at the first bell, to make the kids understand not only that they are cherished, but that education is important to everyone.


The Million Father March was created eight years ago in a church basement in the city of Chicago. Ten men came together and they wanted to do something special – school was approaching in the next two weeks in Chicago and they said, we want to do something with back to school. So they came up with two concepts. One was the Million Man March and that was done by the Honorable Louis Farrakhan in 1996. The other, in South America, fathers on the last day of school go up to their children's schools to thank the principals, thank the teachers, thank the cooks, thank the janitors – to thank anyone who had anything to do with their child's education.

So we decided to combine the two. The power of a million fathers – and it was in name only when we first started -- and going up to encourage the kids. And what it turned into, it turned into fathers going to school in celebration of their children's education on the first day of school. In 2004 we did the first one – we had 25,000 fathers and we thought, that was big stuff to get 25,000 fathers to go to school. The next year, 2005, we had 83,000 fathers, and we through that was big stuff. Every year it kept growing.

Last year we were in 609 cities, and we had more than 800,000 fathers take their children to school for the Million Father March. And that was great.

But this year 2011, the eighth year, we have 760 cities who have signed up to participate in the march, and we are expecting more than one million fathers to take their children to school this year.

All over the country results are coming in, in the Northeast, in the Northwest, in the South. In one county, Broward County, Fla., last year they had 38,000 fathers, they counted them, they took down their names.  This year they expect to have close to 50,000. New York City is weighing in big this year, their Million Father March is on Sept. 8, and they're expecting maybe 200 to 300 schools in New York to participate. This year we expanded it to more – and by the way those were mostly African American fathers those early years. It's open to everybody now.

And so now fathers in Montana, in Idaho, in Nebraska; fathers in Vermont, New Hampshire, fathers in Texas and California and Washington, all over the country fathers are taking their children to school in the Million Father March. We have mayors who have signed on – the mayor of Omaha, Neb., Jim Suttle; the mayor of Cincinnati, Ohio, Mark Mallory; the mayor of Riverside, Calif. Mayors are saying: We will lead this march back to school. We have parades all over the country, if you can believe it. I can't believe it. One of the biggest is in Detroit, Mich.

And all of this because a few men decided to take their children to school on the first day.

This year we have some major, major things in store. To start with, every father who comes to school, we're asking him to sign up for 10 hours of volunteer service with their children. So we're expecting to collect 10 million hours of volunteer service for the schools of America. That by itself it enough to change the face of education in America.

For more information on the Million Father March, or to register your city or school, go to www.blackstarproject.org . You can email Jackson at [email protected] or call 773-285-9600. For schools that have already started, organizers are organizing marches Sept. 7.