The Skanner Wins a Messenger Award 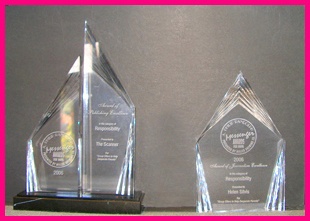 In the annals of African American journalism, few names are as revered as that of A. Philip Randolph. His publication, The Messenger, set the standard for the unflinching, incisive character that is the hallmark of the Black press.
That's why it's such an honor for The Skanner to receive an award in Randolph's name.
The Skanner has been named the recipient of a first-place A. Philip Randolph Messenger Award in the Responsibility category for Helen Silvis' article, "Group Offers to Help Desperate Parents," published in the March 9, 2005 edition of The Portland Skanner. Ms. Silvis' story details the efforts of Parents Anonymous, an organization dedicated to aiding families who have been ravaged by addiction.
The Messenger Awards are presented by the Miller Brewing Co. to members of the National Newspaper Publishers Association, the nationwide network of African American newspapers, at the organization's annual convention. This year's convention and award ceremony took place in June in Seattle, Wash.
Although The Skanner has won Messenger Awards before, this is the first time that the newspaper has earned top honors in a particular category — an accomplishment for which the paper's management and staff take justifiable pride.
"I'm proud of the award, and proud of the job that we do every week," said The Skanner Publisher Bernie Foster. "It's an indication of the responsibility that minority-owned newspapers take to look out for the best interests of our community.
"One of declared values in our mission statement is that we are responsible for the health and vitality of our own community, and this award definitely signifies that for us. It's people like Helen Silvis who help make us what we are today."
The Randolph legacy is indeed a powerful one. Randolph's trailblazing work with The Messenger — in which he advocated for the immediate affirmation of civil rights for African Americans, for broad economic reforms and for the abolition of racism within the labor movement — attracted the attention in 1925 of four New York railway porters. At the time, railway porters around the country were overwhelmingly Black, and the four New Yorkers judged that the time was ripe for them to organize — and that Randolph was the man to carry their standard.
A 12-year struggle ensued to improve the harsh working conditions and poor pay of the porters in the employ of the Pullman Palace Rail Car Co. Finally, in 1937, the company sat down at the bargaining table with Randolph and his associates, and the Brotherhood of Sleeping Car Porters won its first union contract.
But Randolph didn't stop there. He went on to persuade President Franklin Roosevelt to desegregate the country's defense industries, and motivated President Truman to desegregate the U.S Armed Forces. In 1963, Randolph organized the March on Washington, and recruited the Rev. Martin Luther King. Jr. to deliver the keynote speech. He went on to found the A. Philip Randolph Institute, which helped more than 50,000 African American men and women find employment in skilled union positions.
"Salvation for a race, nation or class must come from within," Randolph once said. "Freedom is never granted; it is won. Justice is never given; it is exacted.
"Freedom and justice must be struggled for by the oppressed of all lands and races, and the struggle must be continuous; for freedom is never a final fact, but a continuously evolving process to higher and higher levels of human, social, economic, political and religious relationships."
It is indeed an honor to be the recipient of an award bearing Randolph's name, and a privilege to continue his legacy. The Skanner salutes Ms. Silvis for her outstanding journalism, and our readers for their continuing support.