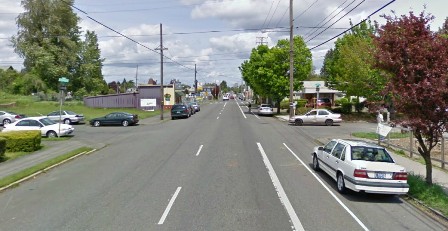 A weeks-long dust up over the process of deciding the future of traffic on North Williams Avenue has brought a widened citizens' advisory committee and a public forum on the issue.

The North Williams Traffic Operations and Safety Project Stakeholder Advisory Committee last month became a lightning rod for debate over bicycling safety and gentrification when a group of local residents brought the issue of race to the table.

Now Portland Bureau of Transportation officials are planning a public forum in September on what the traffic on North Williams Avenue is expected to look like in the future and how the road should be developed to prepare for it.

The exact date has not yet been decided, but the bureau is accepting public input on "topics, speakers, format and/or desirable outcomes," according to the project website. Send your input to project manager Ellen Vanderslice at ellen.vanderslice@portlandoregon.gov or call her at 503-823-4638.

"It's in progress and it's reacting to how things shape up as far as community involvement," said PBOT spokesman Dan Anderson.

State Rep. Lew Frederick, D-Portland, attended one of the July meetings in which a group of local residents – mostly women – advocated for tackling the thorny local history of racism in North Williams Avenue development projects, ultimately changing the path of the project's public input process.

"What was great was the stories that were brought forth about the history, the cultural issues, about the way that the city had presented the concerns – you had the biking community and other experts that were there, but now they were hearing from people who had real knowledge of the community," Frederick said Wednesday.

"When you see Donna Maxey and Avel Gordley and Faye Burch and Michelle DePass all making it clear that they were not going away and their concerns were something the city had to pay attention to – I was real pleased," he said.

Over the past two weeks, after appealing for more public comments, The Skanner News received thoughtful critiques – and some angry rants – of the PDOT process for public input as well as suggestions on street improvements.

One anonymous comment left on www.TheSkanner.com summed up the most extreme feelings of frustration about bikes in general.

"I bought my house in the Eliot neighborhood in 1980, and things have changed significantly. I know everyone is concerned about the environment. Frankly, I am concerned about bicylist who take advantage on the road. e.g. they often ride outside of the bike lane, dart in front of cars, ignore signal lights, don't signal when they are turning or stopping. They are rude and discourteous: I've often heard them yelling expletive deletives when a car honks because they are causing a problem by doing the aforementioned things. I am african american, and travel Williams and Vancouver Aves almost on a daily basis. I think you will see more congestion with just one lane and yes more of those rude bicyclist!!! So I don't want any changes made."

Cyclist and longtime resident Evelyn Murray, who said she uses North Williams about three times a week by car and by bike, had many points.

"Widening (lanes) alone is not enough to meet what is truly needed, I have almost been hit (on my bike) three time this week and watch a biker just bold as she please just run into a truck and crack the mirror … There should be a green space for bike stops with a center with a stop sign in it mandatory stop sign at ever major left and right had turn on the drive ways, biker must know that when the light turn green that they do not have the right of way or do they?  If not they bike as if they do.  Today while waiting for the bus on 82 ave heading over to north Portland a biker came flying down the street on the side walk and we all had to jump out of the way."

A number of people weighed in on the issue of gentrification and public participation in city development projects, including this participant in the safety committee meeting two weeks ago:

"This represents displacement of the History of Williams Ave and the Historic Black Business District, they were never factored into the critical and important elements of preservation for this neighborhood," professional construction and development consultant Faye Burch posted to our website. "Our entire community and history has been displaced and stolen by people who don't even recognize the severe damage they caused as Ntozake Shange says "they stole it, they walked off with it and they don't even know they got it". They took businesses and eliminated the jobs for disenfranchised people and replaced them with absolutely nothing. It is very sad and disheartening."

"The whole gentrification thing is upsetting to me and causes me to speak out to friends and colleagues who are enjoying those same areas now without the knowledge and background as to what it use to be and how most African Americans feel about it. It goes beyond the idea that we 'just weren't taking care of our property,' when a business owner who applies for, pleads for and argues for grants and monies to improve their property and are denied. This happens all around them as fellow African American home and business owners are selling because they can't get anything either. Then adding insult to injury the new white owners are able to get the funds needed, even if their credit is not as good (This very story happened to someone I know personally, so this is not here say). I am concerned for my beautiful city of Portland that a few direct the focus, goals, missions and overall environment of our city. One special interest group with the right city counsel member on board can get many doors opened it seems without much effort. Yet, an individual who just wants to take care of their home, take care of their business and their neighborhood is looked over time and time again for the next big phase of development or so called progress in this city, unless of course they are willing to sell(out)."

PBOT spokesman Anderson says the public input process is evolving to suit the critique that came from the North Williams process.

"The main planning for community involvement has gone into a larger community forum and this is where we're hoping we'll get a good turn-out from the community," Anderson said. "This is where we want to get as many people out as possible."

He said the project management may postpone the Sept. 6 stakeholder advisory meeting until after the forum so they can process all the expected feedback.

Anderson said the city hopes the advisory committee's final report will be concluded by the end of this fall, but if it takes longer PDOT is willing to extend it.

"What's going on right now on North Williams is that we extended the public involvement because it became clear that it was important to raise the level of inclusivity and respect to make sure the North Williams community was at the table and heard," Anderson said.

He added that the overall project is about road safety for all users – pedestrians, drivers, cyclists and bus riders – and that there is expected to be a crosswalk safety enforcement mission on North Williams later this month.

"Crosswalk safety, automobile speeds, bus/bike conflicts, and bikeway capacity -- we want people to come to meetings, voice their opinions, ask clarification and get involved in the project to make sure it is what they want and what they feel is needed."

Frederick said it is a victory that city project managers stopped and listened to local residents who have gone unheard for generations in the Albina area.

"We have seen these things in the past, and if you just expect us to believe that these things have not been decided, we don't believe you -- in the past the decision has been made and then the idea is to go out and get it sold to the community," he said.

"The plans have been challenged, it means that you're going to have a true public comment on this process," Frederick says. "That is great.

"I think this sort of actually changes the approach in a way that's good."

The purpose of this project is to make traveling on North Williams Avenue between Weidler and Killingsworth safer and more comfortable for all users.  This project has six objectives:

To conduct an open planning process through which all voices can be heard by the City.

To improve conditions for bicycling on North Williams.

To maintain or improve conditions for walking on or across North Williams.

To explore innovative solutions and strategies.