By Helen Silvis of The Skanner News
Published: 03 August 2011 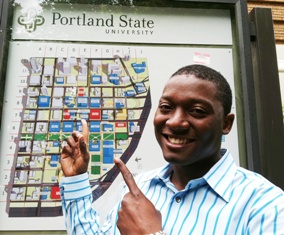 Singer, songwriter Issa has opened for Mann at the Roseland, and for Fabolous at the Convention Center. Now, he's about to ink a deal with R&B superstar Akon.

Issa (his last name is Diop, but he prefers to go by his first name alone)  will perform with Akon, Aug. 13, at the Palais de Congres in Montreal in front of a crowd of 20,000 people. He's one of five performers chosen through Akon's Hitlab.com. Then on Aug. 14, he'll perform in Toronto at the Wham Bam 2011 festival, which also features Ke$ha.  The Skanner News Video: Issa

Akon is one of R&Bs most successful recording artists and producers. According to Forbes magazine, Akon's before tax income was $21 million in 2010.

Issa's break came months after he uploaded songs to Akon's Hitlab.com website. In April, he took a call from a Hitlab producer who told him, "Akon loves your music and he wants to do a song with you."

The call came while Issa was in Atlanta with his girlfriend, Carley Turner, who was interviewing for medical school. Akon was in Atlanta too, so even though the two didn't manage to meet that trip, Issa felt that destiny was knocking at his door.

After talking with the producer for an hour, Issa was invited to a studio session, starting immediately. "That night we recorded for 10 hours straight," Issa said. "But not with Akon, because he was so busy. He was touring with Usher. So I was disappointed not to see him, but I thought that this must be happening for a reason. "

Two months later, back in Portland, Issa got a call asking him to fly to Atlanta immediately. After clearing the trip with his day job, Issa jumped on a plane. On the second day, Issa was in the studio when Akon arrived with his entourage.

"My jaw dropped when Akon walked in" Issa said. 'I've dreamed about this for years, and here he is telling me that he loves my songs. He made me feel proud and happy. I showed him my tracks and after listening to my cover of Bob Marley's 'Is This Love' he said it would be a smash hit and we should work together, especially on that song."

The next day Issa flew with Akon to Montreal for 10 days of recording and writing songs. Akon asked him to write a song for another Hitlab performer, Mary Ndaye, who flew in from Sweden. "It was magical, but nervewracking," Issa said. "I feel very lucky and blessed."

Issa later discovered that Akon had identified the same Bob Marley track as a song he wanted to record.

When the two men did finally meet, they found they had a lot in common, because both men have strong roots in Senegal, on the West coast of Africa. Akon was born in St. Louis, into a musical family, but spent half of his childhood in Dakar. Issa grew up in Senegal, but won the lottery to come to the United States in 2003.

Born into a professional family – his mother was a pharmacist and his father an engineer, Issa says he grew up surrounded by music, both from his home country and from around the world.

"In Senegal we had a such a mix of everything from American rock, R&B and hiphop, to African zouk, mbalaxx, dance hall and reggae. Of course, I listened to Michael Jackson and Prince. It's music that's rhythmic. It makes you dance."

In Senegal musicians usually come from traditionally musical families. In fact, Issa's family would have frowned on him becoming a musician. They would have preferred that he enter a profession like theirs, he says. Between classes at high school, Issa and his friends would freestyle in French.

"I was not necessarily the best," he says. "But I wrote the best lines."

It was not until he arrived in the United States, after winning a place through the immigration lottery, that Issa started teaching himself to compose and sing. His first performance was at Portland State University's International night 2008. He loved it.

"I never felt more confident in my life," he says. "The stage was where I felt I belonged."

So could Issa be about to hit the national scene? The Portland State University graduate hopes he will succeed in the music industry, but just in case, he's keeping his day job as sales director for an Internet Marketing company. He's glad he focused on education first, he says, partly because there are no certainties in the entertainment business, but mostly because being educated is a huge asset in whatever career you choose.

"You've got to follow your dreams, but have an education," he wants to tell his fans. "People are going to respect you more."