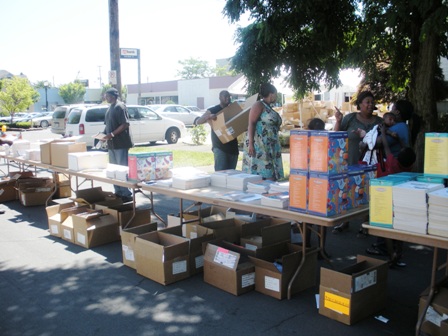 Carolyn Leonard has spent over $2400 on a book giveaway for families in the Portland area but she sees it as a necessary expense.

"Compared to what can happen to our kids, it's worth it," she says.

On Saturday, July 30, Leonard, who has worked in Portland Public Schools for 41 years, held the first giveaway of 26 palettes of K-5 math curriculum books. The event was held on Jessup Street between MLK and Garfield. Neighbors pitched in with lemonade and donuts, children danced to classic soul music and their parents combed through textbooks.

Last year Leonard reached an agreement with PPS to take all the materials that would be recycled under a new book adoption cycle. The only requirement was that she give them away for free.

Leonard spent hours going through the PPS warehouse collecting texts and shrink wrapping them to give away. It cost her $400 a month for storage, not including the cost of trucks to move them.

The collection of texts included student and teacher's editions, which she says help parents understand what schools are trying to teach their kids.

She thinks having resources outside of the schools are essential to education.

"When kids see people in the community that aren't teachers then they're not alienated," says Leonard. "It's an opportunity for one-on-one teaching."

There were a diverse array of people that placed orders for textbooks including the Muslim Education Trust, Head Start, Trillium Charter School, Ockley Green School, Humboldt School, home school parents and a daycare teacher. A couple of people were even collecting books to go to schools in the Philippines.

Passers-by in the neighborhood also stopped by and capitalized on the event.

One father was waiting at the barbershop across the street with his two sons, who attend Bethany Elementary School, when he heard about Leonard's book project.

"My boys are five and seven," he says. "I saw this as an opportunity to keep them busy for the summer."

State officials sanctioned 10 Portland Public Schools last year under No Child Left Behind. While most elementary schools and middle schools have met their targets, there is a significant drop off by high school. Ten out of the 18 designated high schools didn't meet targets and four of those schools were "repeatedly missed targets" and "must offer transfer or tutoring." State testing records show that the majority of scores in math and reading are in the high 70s to mid 80s through elementary and middle school and then dip to mid 50s and 60s once in high school.

These low test scores are part of what inspired Leonard to do this book giveaway.

In the past she has worked with Powell's and the Urban League, doing book handouts and summer tutoring.

She plans to help the Boys and Girls Club run a tutoring program and is going to approach the Park Bureau about math clinics. Leonard hopes to help kids meet benchmarks. She wants to get businesses involved to hand out prizes and add further incentive for students.

In the meantime she still has books to give away. Leonard will be doing another event in the same location this Saturday, weather permitting, from 8 a.m. to 3 p.m. She will also be giving away books on Aug. 13 at the Matt Dishman Community Center Block Party.

After she's finished handing out the math books Leonard plans to take inventory and make a run for other subjects, including 6-8 grade math curriculum and Spanish texts.

Her goal is to inspire students to apply and create from what they've learned, especially in areas like math.

"They're just consumers. What will be of the next generation?"