By Helen Silvis of The Skanner News
Published: 29 July 2011 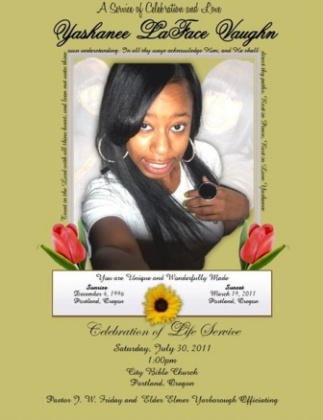 UPDATE: Friends and family of Yashanee Vaughn gathered Saturday July 30 at City Bible Church on Rocky Butte. Hundreds  came to celebrate the teens short life and to lay her remains to rest, packing the church with supporters. Her mother, Shaquita Louis had requested that instead of black, mourners should wear bright colors. The family wore bright red to honor her love of color.
Read here for more on the celebration and to view the slideshow, or stay on this page for the story of her disappearance and the search for her body.
A celebration of life is planned Saturday, July 30 for Yashanee Vaughn. Just 14 years old when her life was stolen away, those who knew her say the pretty Helensview High School student had a big smile and a heart to match. Family, friends and supporters of the family, will gather to remember Yashanee at 1p.m. at City Bible Church,  Rocky Butte Campus, 9200 N.E. FremontSt. A reception will follow.
Yashanee's mother, Ms. Shaquita Louis, said instead of dark colors and hopelessness, she wants to see bright colors and smiles, as people remember her lovely girl, who was full  of life, happiness and great potential.  Yashanee had a sense of style. The last time she was seen alive, she was wearing bright yellow sweats, with pink and green lettering, a white tee-shirt and a black leather jacket. Her hat was black with red.
For those depending on public transport to reach the celebration, Blue Star will be providing a shuttle from 82nd and Fremont St. The service will depart from the Fremont gas station and run from noon to 12:30 to and from City Bible Church.
The Skanner News Video
A Girl Disappears 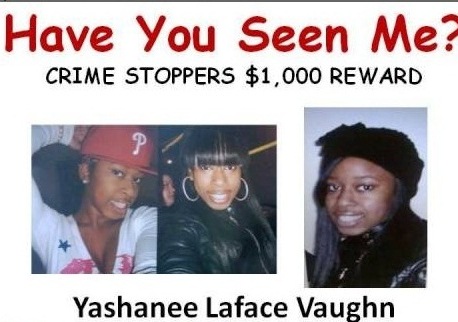 Yashanee disappeared suddenly on March 19, after visiting the Taco Bell on 82nd Avenue with a friend, Parrish Bennette. The two had gone out for a while, and remained friendly.  Yashanee had been planning to visit a friend, but never arrived.
Shaquita Louis set off the alarm, reporting her disappearance to police. At first police thought Yashanee's disappearance could be like the dozens of other missing teen reports filed  every month. Most quickly return to their families.  But Louis knew something was very wrong. Because her daughter kept in close contact with the family, sharing her life with her mother, and often calling her father Yosahwnee Vaughn several times a day.
When Yashanee's cell phone fell silent and no updates appeared on her Facebook page, Louis was devastated. Yashanee spent hours with Facebook and on her cell phone socializing. She had numerous friends who shared her love of music and knew her by her nicknames, Bonnie B and Bonnie Bang. Louis called Parrish and visited the Bennette home looking for answers but was stonewalled.

The Yashanee Movement is Born 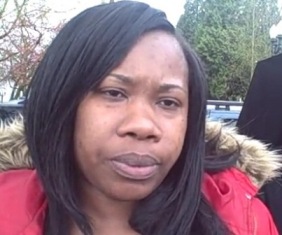 Along with Yashanee's grandmother, Reynelda Hayes, and a small dedicated group of family and friends, Louis launched a search and worked tirelessly to keep the missing girl in the public eye. They appealed to the public for information in the newspaper, online, on television and radio. Crimestoppers offered a reward for any information. The family, along with much of the city,  prayed and waited for news.
Police soon dashed the family's hopes that the tiny girl with the vivacious personality would bounce back into their lives. They told the family they believed she was dead, killed by the 16-year-old boy, who had been her friend. 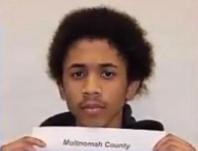 On March 28, police  took Parrish Bennette into custody and charged him with murder and manslaughter.  News of the arrest stunned teenagers across the city. Hundreds of high schoolers knew one or both of the teens. And they poured out their anguish on social networking websites. As always during tragedies, the best and the worst of humanity emerged. Rumors and speculation about Yashanee, her family and what happened to Yashanee circulated. Louis, and The Skanner News, received mean-spirited letters, full of hate and lies about the family. These were reported to police. Yet other people came forward to offer help and comfort. Counselors, educators and pastors saw an opportunity to raise awareness about the problem of domestic violence among teens.

The Ordeal of Waiting

As police searched Rocky Butte unsuccessfully, looking for their beloved  girl's body, the family organized a candlelight vigil, April 16.  It was the first of many vigils that aimed to touch the hearts of anyone who knew anything that could help in the search.
Police and prosecutors kept silent during the long months preceding the bail hearing. For the family, without her body or any real information about what had happened to her, it was difficult to believe she was gone forever. The family needed to find her and bring her body home. 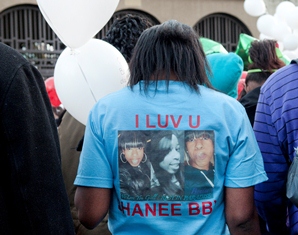 The Yashanee Vaughn Movement kept the appeals going. They made tee-shirts, flyers, and ribbons and spent many hours walking the streets, posting flyers and visiting high schools, where they appealed to teens to come forward and tell anything they knew. Helpers stepped forward to support the fundraising campaign needed to pay for publicity, the search and to create mementos.

The Community Comes Together 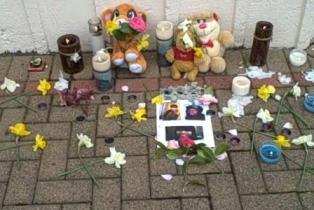 Yashanee's disappearance was one of several tragic losses that took the lives of Portland teens this spring. Mario Alexander Marin, 19, a fellow Helensview student, was shot dead early April 10, close to where Yashanee disappeared. Just days later on April 18, 14-year-old Shiloh Hampton, a popular Madison High football player, was shot and killed outside the Lloyd Center shopping mall. Then, May 16, Shalamar Edmond, 18, a young man climbing the difficult path out of gang life, was shot at New Columbia in North Portland.  Shaquita Louis offered comfort to Hampton's family at a vigil that brought together more than a hundred teens. 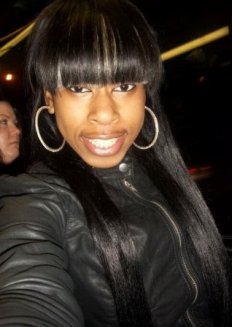 The shootings were not connected to Yashanee, but together the tragedies stood as a symbol of everything that can go wrong for teens. Across East Portland, adults stepped up to bring support to struggling families and teens, through the Restore the Village meetings, and through the church-organized 11/24 campaign.  Many testified about how we, as a community, are failing our children.  And hundreds of people of all races and backgrounds came together to extend practical help to families and teens. Those efforts now are making a difference in the community. 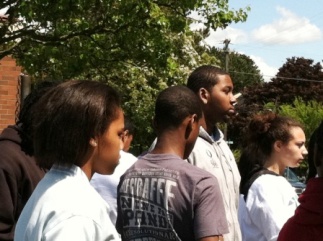 Not for the Faint of Heart
For four long months, Yashanee's family walked through the fire of grief as the case against Bennette worked through the Justice system, bringing a trickle of information. They heard that Bennette had told his father he had shot Yashanee accidentally, but no news of where Yashanee's body could be.

First came an arraignment hearing in April, then a  Grand Jury and in June and July the bail hearing, where prosecutors and defenders began to lay out their cases.  Prosecutors painted a grim scenario that suggested Bennette had beaten and killed Yashanee. They cited forensic evidence that showed two gunshots fired and blood that had flown upward onto the leg of a desk, as well as statements he made to others. The Defense team have a different explanation for the forensic evidence, and say that Bennette talked tough to cover his panic after the accidental killing of a girl who was his friend.  For Louis and Yashanee's grieving family, the ordeal will continue as the trial progresses. But their immediate concern was that they still did not have the body of their baby girl.

A Dance in Honor of Yashanee 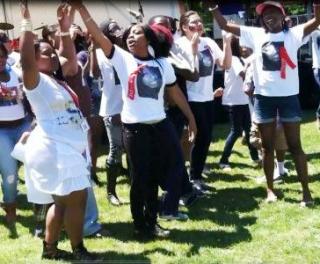 The Yashanee Movement kept up the public appearances and the pressure for information. And on one of the hottest days in the year, at the Good in the Neighborhood celebration, they turned out in force and celebrated her exuberant spirit by dancing to music written specially for Bonnie B.

Louis pleaded publicly for Parrish Bennette to disclose the location of her daughter's body. She even wrote him a letter. And in July, through his defense team, he told investigators where to look.  No deal was struck, contrary to comments posted on news and social networking websites.

The search for Yashanee resumed on Rocky Butte, a heavily wooded wild area near the accused teen's home, and finally her body was found. Her father, mother, grandmother, brother, aunts, and at least a hundred friends and supporters gathered that evening at the foot of the hillside. 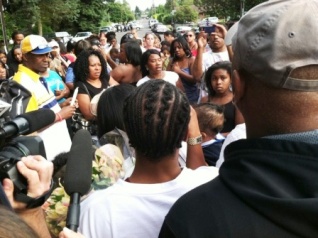 As usual Shaquita Louis was hard at work. It was Louis who was wiping down tables, and putting out pizza. It was Louis who was calling for hungry children to come forward and eat first. Pastor C. Friday was among three ministers who spoke movingly at the vigil, calling for good to come from evil and blessing the family.  The crowd surrounded Yashanee's family, prayed, raised their arms and brought Yashanee home to their hearts.

She Lives in Many Hearts
Vaughn's expressive personality and love of life brought her many friends in her short time on earth. 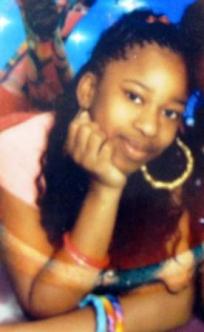 Her family created a Facebook page to gather supporters early on, then a dedicated web page: yashanee.com. On the web page's guestbook, you can read post after post that explains what her memory will mean to hundreds of people in Portland, and around the country. Here are just a few of the comments:

Towanda posted a message for Shaquita Louis: "I want you to know that when the days and nights get lonely as they will just call on God for your strength. Take all the time you need for you and your other children as life will never be the same again. Know that I am here if you need me and only a phone call away".
Raviance talked to Yashanee directly: You're an angel that didn't deserve that. Gone but never forgotten.
Brittany says: "I Will Always And Forevr Love You Shanee, xoxox"