Trimet Gets Tough on Fare Jumpers

If a TriMet fare inspector caught you riding the Max train without a ticket any time during the last five years, your punishment likely was a warning. But from now on, even if you're a first-time offender, you risk a fine of at least $175. Or you could be banned from the service for 30 to 90 days. (Check out the graphic below to see fare inspection outcomes by year, including 2011 through June.)

TriMet recently announced the policy change, saying the transportation agency will spend an additional $580,000 to hire six new fare inspectors. That will bring the total cost of the 18-strong fare inspection program to $1.74 million. Yet, if every ticketless rider stopped last year had paid the basic fine, TriMet would have pocketed just $1 million.
After court fees are paid, TriMet collects $69 for every $175 fine. The 6,469 citations issued in 2010 brought TriMet around $179,000.
"Does everyone pay that fine – probably not; it's the same with parking tickets," agency spokesperson Mary Fetsch told The Skanner News. "Obviously, the program costs more than we recover. It's about the integrity of the system. If you pay your fare then the person sitting next to you should pay their fare. It's about fairness."
Neil McFarlane, TriMet's general manager since July 2010, made the decision to switch emphasis from warnings to fines after fielding questions at public meetings about the income lost from ticketless riders, Fetsch said.
"It's a message to riders that you need to pay your fare or you face a stiff penalty."
The agency takes in about $94 million from passenger fares, about 20 percent of its operating costs. It estimates fare avoidance at around 5.9 percent, less than many riders imagine because half of all riders carry a monthly pass, according to local transportation blog Portland Afoot.

Racial Profiling? No Way to Tell 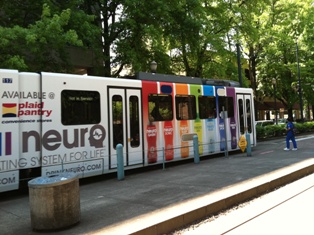 Fetsch says inspectors will continue to have discretion on enforcing the policy. The agency does not keep figures on how many teens are warned each year, or demographic information on who gets warned versus who gets fined.
That's a problem says Jon Ostar, co-director of the nonprofit OPAL, Environmental Justice Oregon. Ostar says failing to record demographic information about who is stopped and how issues are resolved is bad practice when civil rights are at stake.
"Fare inspectors and police officers are very different, but after decades of evidence of racial profiling, it has become standard practice and a requirement for officers to identify the racial demographics and background of the people they stop," Oster said.
Since the policy was announced a group of teens working on an OPAL project was stopped by an inspector, Oster said.
All had youth passes, he said, however one Native American girl was issued a $175 ticket.
"She had a valid student pass, but school's out and she had forgotten her student ID or didn't realize she needed it. I'd like to believe fare inspectors would be trained to use discretion here. I'd like to believe, this isn't what they want inspectors to be doing -- issuing a substantial fine to a girl under 17, for an infraction, even though she had paid and had a ticket."
Oster says he recognizes this kind of anecdotal evidence doesn't mean inspectors are profiling. But he says it increases his concerns.
Research on the criminal justice system and the education system, for example, has shown that teens of color are treated with more severity than White teens.
"We're really concerned about profiling…" Oster says. "We don't have the data, so we can't say what's happening, but that's what history suggests."
So what safeguards are in place to ensure that profiling isn't a problem at TriMet?
"We don't single out individuals based on race," said Fetsch for TriMet. "Obviously we want to enforce the rules fairly for everybody. Certainly, we'll be monitoring that if there are complaints. People can bring information forward if they have concerns."

A Missed Opportunity
The policy change comes just as the Oregon legislature has cut a tax credit program that funded free TriMet passes for all Portland Public Schools high school students. State Rep. Jules Bailey, D-Portland, told The Skanner News that legislators couldn't justify keeping the program.
OPAL staff had hoped to see the program extended to other school districts. Reynolds, David Douglas, Centennial and Parkrose, for example, serve higher numbers of students from poor and struggling families.
"There are even more students in those districts that need these passes," Oster said.
Schools must provide transportation for students who live more than 1.5 miles away. But Portland ditched yellow buses and handed out bus passes instead.
"Even though we don't think the tax credits were the right way to fund passes, cutting that program doesn't make economic sense," Oster said.
He argues that paying for the buses will actually cost taxpayers $700,000 more, while offering a lot less benefit to fewer teens. Eighty percent of PPS students used TriMet to get to school, compared to 44 percent before the passes were issued. And teens could also use the passes to reach jobs, sports practices and other community events.
"It's a huge missed opportunity from our leaders," Oster said. "They are missing the economic, environmental and social equity benefits of ensuring a greater percentage of youth become lifelong transit users. That's the only way we will solve our problems with toxic air in the Portland Metro region."
Fetsch said TriMet decided to change the inspection policy now for two reasons: first because ticket machines, which historically have broken down a lot, have now been upgraded and work far better; and second because this year's budget allowed for new hiring.
TriMet has cut other programs, such as a program offering outreach to at-risk youth by former gang members. That program started in 2008 with 10 people from Victory Outreach,
" It's been cut back to four individuals working three days a week, and their focus is on providing a presence and reporting any issues," Fetsch said.