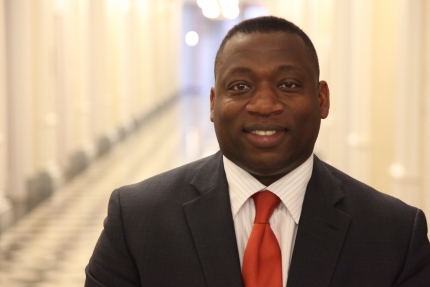 Boosting a new effort in equity in construction contracting in the Portland metro area, the National Association of Minority Contractors' Oregon chapter this week announced attorney Melvin Oden-Orr is its first-ever executive director.

The appointment, which was made on an interim basis, represents a bold move forward for the group, which recently played a significant role in the city's creation of new guidelines to address decades-old racial disparities in how it spends taxpayer dollars for infrastructure construction and improvement.

"I think that the organization is at a critical stage in its development and I think I have something to offer to help it move to the next level," Oden-Orr says. "For those certified firms out there who think that they have particular issues that are not being addressed, we welcome their involvement in our efforts – as well as anyone who supports equity in public contracting."

A specialist in business law with a background of expertise in historically disadvantaged businesses, Oden-Orr says he'll continue to maintain his law firm while helping lead the organization in new efforts to tighten its operations and recruit new members.

Oden-Orr told The Skanner News that plans are under way to revamp NAMC-Oregon's website; flesh out new programs; create an annual statewide conference on contracting equity; and put together more opportunities for its members to come together with their public works partners "to provide focused attention on increasing the utilization of certified firms," he said.

"One of our big efforts is going to be membership – we want to establish the value of the organization to our members as part of the recruitment," he said. "It is a leap into the future and it's a future that is focused on increasing the capacity of our firms and helping them further develop."

A member of the organization since its inception, Oden-Orr is a former corporate counsel for TriMet and the Portland Development Commission.

He has taught courses in Race and the Law at the Northwestern School of Law at Lewis & Clark College. This year President Barack Obama named him a "Champion of Change" in the transportation industry.

Oden-Orr earned a Bachelor of Arts degree in Political Science from UCLA, and graduated from the University of Illinois College of Law. There he was honored with the Rickert Award for public service.

NAMC-Oregon members issued statements of support for the move praising Oden-Orr's vision on expanding the organization's operations with day-to-day oversight lacking in the past.

"Over the past few months that the Board has considered the need for an executive director, he has provided thoughtful input on that person's role and the direction of the organization," said Faye Burch of Faye Burch and Associates consulting, a founding member.

"We have an aggressive plan moving forward," said NAMCO Board President Mark Matthews of Pacificmark Construction Corporation. "Establishing NAMC-Oregon as the voice of minority contractors throughout Oregon; better supporting our members' development; and continuing to advocate for greater opportunities for certified minority firms by leveling the playing field and removing barriers to their ability to participate on both public and private construction projects in meaningful ways."

"Melvin brings to the role of executive director, not just the intellectual horse-power of a first-class attorney, but a passion for working with our people: minority businesses," said founding member James Posey, owner of Workhorse Construction, Inc.

For more information on NAMC-Oregon go to the group's website, www.namc-oregon.org.