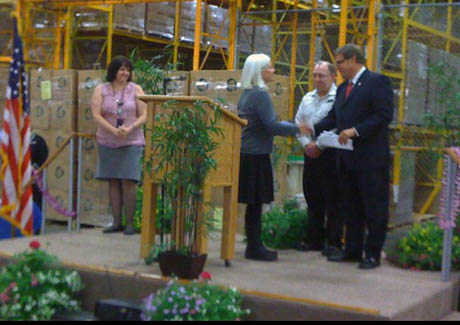 In seven Oregon state prisons, one job assignment has become especially sought-after; at one, you have to be all but a lifer to get on the team.

The prison garden, according to a number of program administrators around the state, has become a way for inmates to learn new skills, cooperate on a project and help feed themselves and their communities.

While there haven't been any studies completed on the effect the program has on recidivism or aggression, administrators say they see a difference in the attitudes of the inmate gardeners.

For the last two years, the Lettuce Grow program has been a driving force behind seven prison gardens in the state of Oregon. In addition to finding donated seeds, soil amendments, and volunteers, program founder Sarah Patterson helped bring in an Oregon State University Master Gardener class to each of the facilities that Lettuce Grow assists.

"Inmates bring in some really tough questions," she said.

Dan Bielenberg, who runs the program at Santiam Correctional Institution, says he sees "the light switch go on" when inmates take the class and get hands-on training in the gardens, which are all organic.

"My expectation is that they'll make their community a better place," he said of gardener inmates when they're released.

The gardens are also making the prisons better places.

More than about 60 percent of the produce from gardens is used in the prison cafeteria. The rest is donated to the Oregon Food Bank. Ahlstrom said without Lettuce Grow volunteers to pick up the extra produce to take for the Feed the Hungry program, there wouldn't be a way to make the delivery. Before the program began operating at Columbia River, he'd make a call out to other state agencies to pick up the extra produce.

"There are years when I've grown way too much," he said.

Last year, with a nearly non-existent summer, crop yields were down by several thousand pounds. This year, the garden project administrators are all hoping for more food – for the inmate's stomachs as well as the community.

Right now, Ahlstrom is growing a lot of vegetables that will store well such as beans, zucchini, and squash. Over at Santiam, Bielenberg and the inmates are growing garlic, potatoes, chives, shallots, tomatoes, and have experimental plots with corn, beans and squash.

Looking forward, Patterson would like to expand the program to more prisons. Other prisons have their own gardens and she'd like to assist them by expanding those gardens and the Master Gardener classes. She says the nonprofit organization needs more volunteers, including an executive director who could write grants and help raise money from the community. She's also trying to develop a protocol for establishing a garden program for prisons in other states.

"How many cherry tomatoes do you need to grow to give each inmate one tomato," she asked.

With 60,000 pounds of food produced for Lettuce Grow institutions and 20,000 given to local food banks, it seems this nonprofit has it figured out.