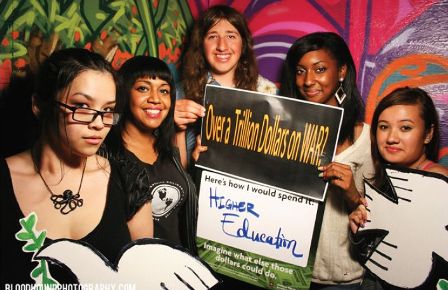 Free workshops and events run from 11 a.m. to 3 p.m. on Thursday and Friday, with a cultural field trip and outing to MercyCorps on Saturday.

AFSC youth coordinator Mireaya Medina says the event is a crucial point of education for young people of color who are not adequately taught about the history of their own communities in school.

"Our goal is to be able to train between 40 and 50 youth, and then those 40 to 50 youth go and train another 40 to 50 youth," she said. "So the training is constantly evolving sand breaking the chains of racism in Portland."

Freedom Schools were grassroots education projects by African American Civil Rights organizers in the South during the Civil Rights movement. Their subject matter – race, class and political history – galvanized youths to mobilize against oppressive institutions, often in the face of government violence.

"It's something that was done quite a bit in the 60's and vary sparingly since then, but its just carrying on a tradition that got lost somewhere," Medina said.

Portland's Freedom School is named in honor of Jacqueline Holmes, a community organizer who worked with the Bradley-Angle House, the Albina Ministerial Alliance, and the Metropolitan Public Defender.

The local Freedom School is funded by a Youth Action Grant grant written by three teenagers who participate with the AFSC youth group, United Voices: Vy Nguyen, 18; Indasia Summerfield, 17; and Jessica Valdesiera, 17. More students have also helped with the project, including Christopher Luchini 15.

These same four kids won second place in a national video competition earlier this year, creating a film, "Trillionaire," on the subject of, "If I Had a Billion Dollars."

Medina said the group had attended a Freedom School organized in Seattle last winter, and they decided it is something needed in their own home town.

"One of the kids told me yesterday, the reason why it's important to her is she doesn't want to live in the past anymore she wants to live in the future and for young people to build the future."

Medina, who works with the young people all year round, says youth of color need to be educated about their political and social history as a way of combating a sense of oppression they carry with them which damages their self-esteem.

"The subject matter may seem kind of adult, but the young people need to learn about the history of immigration in this country, and some things about race and police in this country, and what to if you're stopped by the police and what your rights are – things that most often impact the lives of people of color," she said.

They'll also be looking at issues that impact others – such as age-ism.

"It should be a pretty inclusive and cool three-day training, then the last day we're taking a field trip to MercyCorps," she said.

This event is free and made possible by the City Of Portland Youth Action Grant Program and Portland AFSC. Bus tickets and meals are provided.