By Helen Silvis of The Skanner News
Published: 20 June 2011 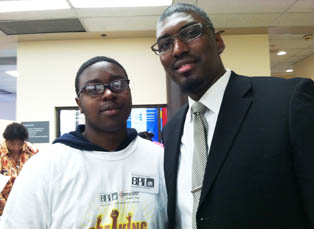 The Black Parent Initiative held its second annual 'Breaking the Cycle, Releasing the Dream' conference, focused on education, parenting and supporting student success. Held at Concordia College in North Portland the conference featured workshops by local and national experts. Speakers included: Phillip Jackson of The Black Star project in Chicago; Dr. Andrae Brown of Lewis and Clark Graduate School of Education and Counseling; author and counselor Dr. Johnny Parker; Dr. Joy DeGruy of Portland State University; Dr. Stephanie Irby-Coard; Christopher James of the Black Fatherhood project; and Tina Marie Glover. The keynote speaker was Dr. Jawanza Kunjufu.
Participants spoke highly of all the workshops, which covered everything from building healthy relationships and supporting  your African American student , to children's mental health. Dr. Kunjufu, who knows a lot about nutrition, even managed to include a plug for salad and green smoothies.
The Skanner News dropped in on two sessions: Dr. Johnny Parker's session on Healthy Relationships and co-parenting; and Dr Kunjufu's wrap-up session. 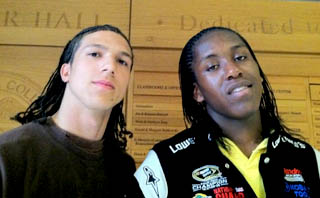 Healthy Relationships Make for Strong, Happy Teens
Dr. Parker, supported by his wife Lezlyn, presented his five building blocks for a healthy relationship: Integrity, Nurturance, Honor, Humility, and Commitment.
The building blocks apply to all kinds of relationships, parent-child relationships as well as life partners, he said. Integrity is number one, because all relationships need that foundation of honesty and openness. Without integrity you can't build trust, Parker said, quoting  H. Jackson Browne.
"Live so that when your children think of fairness and integrity they think of you."
Dr. Parker explained that all relationship need to be fed with attention and time.  Yet different people need very different things from their loved ones. For example, one of his children is outgoing and a 'people person,' while the other prefers less socializing and more privacy.
"You have to understand how your kids are different and how they like to be nurtured," he said. "You have to know how people want to be nurtured because people are different."
Dr. Parker pointed out a classic sex difference that may not apply to everyone, but fits for many: men usually don't like to talk for the sake of talking unless there is a goal or reason, whereas women need to discuss daily ups and downs.
"We talk more when we are doing something with you," he told the women present.
The third building block, Honor, involves appreciation and respect for one another and also keeping trust alive by demonstrating trustworthiness. The block of humility means recognizing your own weaknesses as well as your strengths, and respecting that your partner, children and colleagues have strengths that exceed yours in some areas.
"I think we all have a sweet spot," he said. "God has wired us all differently so we all have different strengths."
The brick of commitment means continuing to look for ways to enrich your relationships. "What are your challenges? How can you improve?"
Open and warm, the husband and wife team talked about the benefits of living in a supportive community, and the strength they draw from their church. One example, Parker  said, is the 300 project, where 300 people commit to a positive activity for a month. One month, 300 men in their church made a commitment to appreciate women. A simple idea, he said, yet the results were powerful.

The Best Teachers have High Expectations and Excellent Class Management Skills
At the final wrap up session Dr. Jawanza Kunjufu, expanded on his keynote speech. Focusing on the experience of Black boys in education, he said the most important grades are kindergarten, 4th grade and 9th grade.
"Our boys are still academically competitive in the early years," he said. "For some reason the long longer that our children are in the school system, the more their academic achievement declines. So the problem is systemic not genetic."
If you look at education from the point of view of a Black boy who has not had enough support to be academically equal, Kunjufu said, "It's embarrassing."
Once education has become a source of embarrassment and shame, instead of pride, mastery and accomplishment, boys quickly stop trying.
Kunjufu pointed out that while 83 percent of teachers are White women, just 6 percent are African American and just 1 percent is Black men.
"The future of the Black race lies in the hands of single parent mothers and White female teachers," he said.  Clearly this absence of Black men in schools undermines Black students, who need role models who look like them, but he stressed that race and gender are not necessarily the most important characteristic of a teacher. What's important is for a teacher to have high expectations for students, he said, along with very good classroom management skills.
"Just being Black is not enough," he said. "Are you listening Clarence Thomas? How can you take advantage of programs and then deny them to others?"
The advantages of Afrocentric schools, he said, can be seen in institutions such as the Historically Black Colleges and Universities, which educate just 12 percent of undergraduate students, but graduate 30 percent of all Black graduates.

Community Values meet the 'Me First' Culture
The contribution of middle-class African Americans is badly needed in impoverished Black communities, Kunjufu said. Yet success has often meant leaving behind your less fortunate neighbors and traditional Black values. Values are crucial, he said, and often the values of the dominant White culture, do not match the values of a Black culture that has been forged in collective struggle. He told this story about his own experience in 4th Grade.
Kunjufu's teacher asked him what his grade was and he said 100 percent. Then he asked about his best friend's grade. He laughed and didn't want to say but eventually said, 40. The teacher took a pen and crossed out the 100 replacing it with 40.
'From now on your grade will be whatever your friend gets.'
"Schools teach more than the three Rs," he said. They teach values.
And schools teach 'I' not 'WE'. "
He urged successful Blacks not to leave behind traditional Black values that recognize that the fate of one is the fate of us all. Give back to the community, he urged.
And he listed some strengths that African American families share:
A strong work ethic
Flexible roles
Extended family, and
A strong orientation to spirituality
Kunjufu's diverse talk included dietary advice. He is a strong advocate for healthy eating, telling the audience to eat more green foods. Among his recommendations were salad and green smoothies. How do you make one?  You will need a powerful blender. Throw in some kale, spinach or other greens with fruit juice. Then add berries, banana and other fruit for a great tasting, but green, smoothie.

PHOTOS From top: LaRonn Arnold with Dr. Andrae Brown; Edward (left) and Trees (R) attended the conference with their life mentor.  Edward said he has just started his first job at a clothing store. Trees is still trying to set his career course.