By Brian Stimson of The Skanner News
Published: 10 June 2011 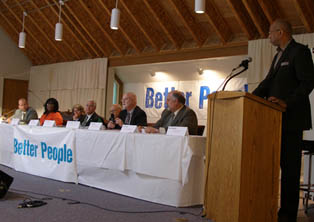 This week anti-crime crusader Kevin Mannix revealed that behind all the get-tough-crime rhetoric he's talked about over the years, there's been something soft and squishy there all along.

Mannix, the man behind Measure 11 and other measures that have increased sentences for a variety of crimes, shocked the audience at Better People's  June 9 "Pay Now or Pay Later" forum  by saying some pretty progressive things about crime and punishment.

The president of the Oregon Anti-Crime Alliance, says he's been advocating all along about making it easier for reformed felons to find employment and housing, the benefits of treatment and rehabilitation behind bars. Most importantly, he emphasized the importance of properly funding early childhood education and other social programs usually supported by Oregon's progressives.

Mannix even said he'd come up with a list of 495 misdemeanor crimes that he thinks should be downgraded to violations.

"There are some people incarcerated today that shouldn't be there," he said.

He blamed the Oregonian and other news outlets for focusing on the sentencing portion of his criminal justice philosophy.

One of the forum's panelists had to ask the obvious, "Who are you and what did you do with the Kevin we all know?"

"He's back in Salem," Mannix replied with a smile.

It begs the question: Is Mannix building the foundations of a political campaign by winning over progressive voters?

"No, not at the moment," he told The Skanner News. "But as a politician, never say never."

Much of the panel discussed ways in which the current criminal justice system doesn't work to deter future crime, as well as the programs that seem to work that don't get adequate funding.

Multnomah County Sheriffs Lt. Vera Pool said jail has little deterrent effect on many of those housed there – a sentiment echoed by others. Pool said that we assume that warehousing someone after committing a crime would cause them to be released and become law-abiding citizens.

One of the only exceptions to this rule – aside from those who don't re-offend -- was the county's Restitution Center, an alternate to imprisonment where inmates could leave during the day for work and help to pay for their living arrangements. Not all inmates were allowed to participate in the program, but those who did were able to earn their GEDs and leave their confinement with a work history and money to support themselves.

Prins, a former Multnomah County Deputy District Attorney, said that an over-reliance on imprisonment has tied up public money that could be more wisely spent on rehabilitation, treatment, education and job-training programs.

Many of the panelists talked about the decrease in crime over the last decade and many of the reasons behind it. Mannix credits his 1994 Measure 11 contributed to the decline in violent crime Oregon saw since that year.

Judge Edward J. Jones and Prins argued that even states that didn't enact tough sentencing guidelines saw similar drops in crime. Jones says it is a combination of lower lead concentrations in the blood because of restrictions on lead-based paint and gasoline (high lead levels can lead to anger, learning disabilities and other problems researchers link to crime); the availability of abortion that lead to a decrease in unwanted children; and the decline of the crack cocaine epidemic. He said the increase in incarceration is also to credit for some of the decrease.

Prins said crime is influenced by multiple factors and sometimes politicians, judges, police and prosecutors have absolutely no control over it.

"We have a duty to understand that," he said.

Several attendees raised a problem related to their past imprisonment – no matter how hard they worked, no matter what college degrees they had attained, no matter how many years had passed, they were consistently denied the opportunity of employment and housing. Effectively, they were barred from ever moving on with their lives.

"How long is long enough before I'm pardoned?" pleaded one man whose last felony conviction was in 1998 and had since been living a clean life and working as a counselor. He said he was working towards attaining his master's degree, but was uncertain if the investment would pay off considering the felon stigma that prevented him from many jobs in the counseling field.

Mannix and many others agreed, there needs to be reform that allows people who have corrected their behavior to move on with their lives. Mannix said he supports reform of laws that prevent felons from attaining many professional licenses in the state of Oregon.

Not all felonies are created equal, he said, but the law treats them like they are.