Interviewing As a Felon: How a Criminal Past Can Impede the Job Search

By Brian Stimson of The Skanner News
Published: 09 June 2011 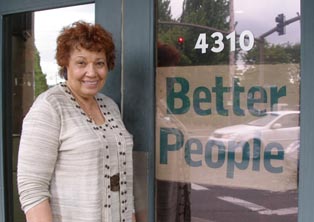 With a crime on your record, getting that next job just got harder.

When a person is given a felony conviction, in today's modern world, they've just been handed a life sentence. Until they die, they will likely forever be labeled a felon.

And given that we are imprisoning more of our own citizens than we have ever before – and more than any other country in the earth, including China – it's surprising that not more is being done in the name of reform, to allow people to "correct" themselves after they've served their sentences.

For ex-offenders, there is no easy answer. The recession has created a surplus of job-seekers and employers have their pick.

Clariner Boston, executive director of Better People, says that aside from the basic difficulty of being a felon, the average job-seeker increases their frustration by not putting the time or energy that is actually needed to secure employment.

"Looking for employment is a job itself," she said, encouraging ex-offenders looking for work to spend at least 8 hours a day on the task.

Better People is a nonprofit in Portland that assists ex-offenders in turning their lives around and finding employment. She said Better People has a specific job-readiness program, apart from their lifeskills Moral Recognition Therapy program, that deals with the issues of being a felon looking for a job.

And not all of Boston's clients are fresh out of the big house. The recession is helping to further uproot the lives of those who have long since walked away from their crimes. Even where workers are laid off through no fault of their own, potential employers are shutting doors, despite decades having passed since their imprisonment.

Boston says that because of the recession, their placement numbers are down from "normal" years, although this year has been better than the last. Clients with Better People do have a leg up when it comes to finding employment. Boston's staff has amassed a list of thousands of employers and the job readiness classes provide a way to observe a person's work ethic, commitment, skill set and dependability.

"We just have to be vigilant and advocate for our clients," she said.

Over at the Multnomah County Department of Community Justice's Londer Learning Center, Carole Scholl says that the ex-offenders she works with – about 1,000 last year – struggle with inadequate skills and education. The center offers free GED classes and assistance in filling out online applications, a class on searching for work with a criminal history, a specialty class for women and more.

On searching for work, Scholl says ex-offenders need to increase their skill level, be prepared to talk about their past, explain how they've moved on and learn to explain the skills you do have, even if you've spent a good deal of time without official employment.

"You also need to find those employers willing to listen to your story," she said.

She said some ex-offenders, those who had good jobs before they were convicted of a felony, need to learn that they may not be able to get the kind of employment they were used to before their conviction. They might just have to work their way up again.

"A lot of times, employers aren't aware of the benefit of hiring an offender on supervision," he said.

If they don't show up for work, or end up being a problem, employers can call the parole and probation officer to hold the employee accountable.

Neal said that there isn't a clear correlation between recidivism and employment. It all comes down to the person and the "meaningfulness" that the employment gives to that person. He says that someone with a lot of criminal associates and "criminal thinking" that hasn't been socialized won't care if they've got a steady paycheck at McDonalds or Subway. There has to be proper attention placed on addressing social attitudes before employment will affect recidivism amongst that set of ex-offenders.

"We do get a lot of offenders who are employable … they have skill … employment wasn't the issue," he said.

Both Boston and Scholl say there needs to be more help afforded those with a criminal record. Scholl says that jails and prisons need to offer more job training, education and mentoring programs.

"We have far too many people incarcerated," she said.

With more and more laws that extend the length of sentences, the more people that lose their skills as they sit in a jail cell.

"They can't compete in the current labor force," she said.

Scholl says that there are nonprofits – like Better People – who can help. SE Works is a community workforce development organization that helps ex-offenders find work. She says government could do a better job of funding lower-skill work programs.