By Helen Silvis of The Skanner News
Published: 30 May 2011 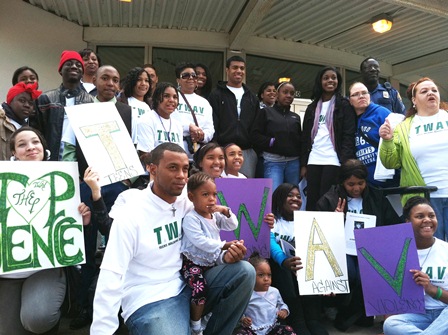 Three events Friday and Saturday brought together men, women and youth in a community-led campaign to stop the violence that has taken the lives of five Black teens this year. Organizers are pushing to strengthen support networks in Portland's African American and minority communities. Advocates say the increase in shootings, is simply the most visible sign of an environment that is failing many children and teens.
On Friday, men and women gathered at Holladay Park near the Lloyd Center, answering gang outreach worker John Canda's call for 100 men. The aim? To demonstrate a caring presence in a park where 14-year-old Shiloh Hampton was shot and killed just weeks ago.  The group plans to continue its presence in the Lloyd District every Friday afternoon, in two shifts: 4:30 pm and 8 pm.
At noon, Saturday, a 'Teen Walk Against Violence' made a statement in inner Northeast Portland. 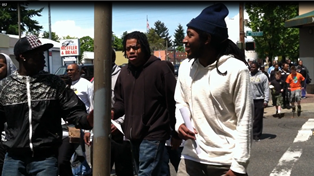 Later Saturday afternoon, the Restore the Village campaign brought community members to the Police Activities League Youth Center at 422 N.E. 172nd Ave., to share ideas and plan events., including a job and career session set for June 18 at Seeznin's sports bar.
Each group has plans for more events and activities in the weeks and months to come. The next TWAV teen walk is set for Columbia Park in North Portland on June 11.

At the Teen Walk Youth Lead but Adults also Support
About 30 people set out from the Blazer Boys and Girls Club, Saturday, taking part in a Teen Walk Against Violence, organized by LaQuoya Tyler, her grandmother Roberta Tyler and friends from her church youth group. Along the way, more men women and children joined the group, and the numbers swelled to about 70. As they walked south on Martin Luther King Jr. Blvd. , they chanted 'Stop the Violence' with upbeat energy.  The Skanner News Video 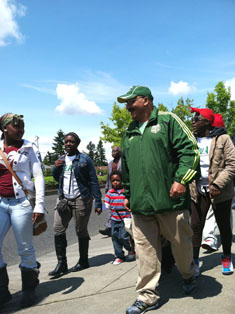 "I am going to help you lead this one, since it is the first," said Roberta Tyler to the young people. "Next time it's going to be up to you."

Many of the walkers had been personally touched by the loss of a loved one to violence. Shelteria McDonald, 20, said her boyfriend was shot at the mall a year ago. Teressa Raiford lost her nephew Andre Payton last year. Others cited the recent shooting deaths of Shalamar Edmond, Shiloh Hampton, and Mario Alexander Marin. Sgt. Willie Halliburton came with his two teen children, and provided a police escort, even though it was his day off.

Ms. Shaquita Louis walked along with family and friends of her daughter, missing teen Yashanee Vaughn. The Skanner News Video: Shaquita Louis
The first stop was Irving Park where Roberta Tyler asked people to come forward and say whatever was on their minds. Many spoke with inspirational effect, including: Pastor J.W. Friday, Troy Tate, Karen Jackson, Marsha McDonald, Teressa Raiford, Karl Acker and many others.
Parenting, family and community supports for families, all were high on the list of burning topics. Speakers urged parents to get involved with their children, help them focus on school, and also said that everyone should look out for their neighbors' children. 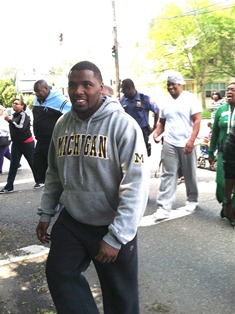 "I want to say to the youth: We care about you. We love you," said Karen Jackson. "It takes a village. So we need to push, pray until something happens. Push, pray until something happens. And it's happening right now."
These ordinary moms, dads and kids say they want to build a network of support around struggling teens, offering alternatives to poverty, school failure, hopelessness and gangs.

Marty Williams, a coach at Grant High School told the Skanner News during the walk that parents may need support to get their kids to school on time every day. It isn't easy to keep teens on track, he said, so sometimes parents just give up. Three things are vital to student success, Williams said. "Number one: You've got to show up," he said. "Number two: You've got to follow through. You have to try because through trying you can recognize your potential and where you have to do better. It builds your confidence. Number three: You've got to finish. You have to finish that race. If you're playing football, you can't get to that line and not score the goal."

Marsha McDonald urged teens to get involved with positive activities. Her own church, Highland Christian Center, welcomes any teens, she said. After service on every fourth Sunday, the church offers basketball, food and other activities from 11 am. And the youth ministry wants to help teens achieve any goals they want to set. 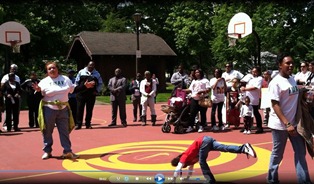 Karl Acker, a former Grant High School track star, who now attends Louisiana State University, spoke about the challenges facing young African Americans.
"As young Black males, as young Black females, we are targets," he told the group. "There's a war for our minds out here. We live in an information age… and we can get a piece of information so fast with the technology we have. And what is it in the form of: advertising. They all want us to spend money."
Acker said having two involved parents was what helped him make it to university. For those who don't have that, the community is the key.

"If you are in our lives, you are going to have an effect," he said. "We are only as strong as you all make us. We need y'all," he said.
"With you all telling us what's real, and what's not, we are not going to be fooled by an advertisement. Because they are telling us how to think; they are telling us who we are, and who we're not. BET, MTV, looking at that and seeing the rappers, you think: 'Damn, they're the only ones with money that look like me, so what they are saying must be real.'
"No! They're saying that so that you can go spend money on those cars, on that jewelry, on stuff with no meaning. So you don't think about going out and getting the knowledge and the information: you don't make some money and make that money work for you and bring that money back to the community, so we have the resources to make the money the right way. That's why they are out there making the money the wrong way. With you all in the house, I'm telling you it's that much more important."
At King Park, Pastor Friday called for everyone to come together around the youth. A prayer focused on creating unity of purpose.
Sgt. Halliburton told the gathering they had to take ownership of the problem. "If you see someone going the wrong way, take them aside and say: 'Hey bro' that 'aint you.' Or: 'That doesn't seem like you girl.' It's going to take the community coming to us as well as us coming to the community. It's going to take you guys to make a difference." 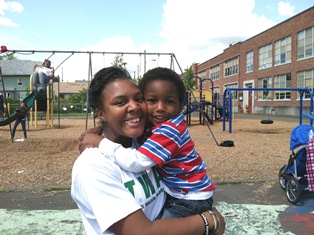 PHOTOS From Top: TWAV pose before leaving the Boys and Girls Club; The walk traveled south along Martin Luther King Jr. Blvd.; People of all ages joined along the way; Marty Williams;  Roberta Tyler speaks to walkers at Irving Park;  Karl Acker; LaQuoya Tyler, who organized the walk was happy with the enthusiastic turnout.