Brian Stimson of The Skanner News
Published: 29 May 2011 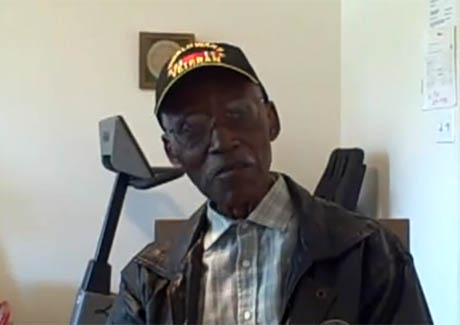 At 90, Russell Jones is a portrait of health. The World War II vet is spry and could outwalk most 70-year-olds in his downtown Vancouver assisted-living apartment building.

While he's been retired for some time now, Jones spent a considerable amount of time serving in the U.S. Army.

Enlisting in the months prior to the outbreak of the United States' involvement in World War II, Jones said his time in the military shaped his life.

Despite mistreatment from southern White officers, having ammunition confiscated before battle and watching tons of food go to waste as Black soldiers were told their rations sank at sea, Jones says he stuck with the military.

Now living in downtown Vancouver, Wa. near his daughter Sandy, the veteran decided to tell at least part of his story to The Skanner News.

Ever since seeing his uncle come home in his uniform from the 10th Cavalry – of Buffalo Soldier days – did Jones want to join the armed forces. There was also another reason.

"Money," he said. "We didn't have no money in those days. It was during the depression."

Graduating high school from a rural area in Kansas, his mother wouldn't let him join right away. Finally, at the age of 19, he enlisted in Coffeeville, Kansas and was sent to basic training in Fort Leonard Wood.

"Just before basic was finished, war broke out," he said. "We were shipped out the next day to the South Pacific."

Heading through the Panama Canal, onto Australia, Jones and his crewmates finally landed on New Caledonia for training.

During a standdown on the island – Jones' all Black 810th and 811th Engineer Aviation battalions were assigned to build bridges. A weapon carrier fell on an unsuspecting troop, pinning him.

"We had all sorts of equipment, we could have pulled the truck off him," he said.

An officer came over and said we can't get it off him.

"He pulled out his pistol and shot him in the head," says Jones.

If anyone were to ask, ordered the officer, the murdered troop died in battle.

"What can you do when you're a million miles from home," Jones asked. "They shot this kid and we could've gotten him out. I thought that was dirty. I don't know if he's living now, but I doubt it"

Jones says he never saw that officer again and thinks that he probably was killed in action.

In Guadalcanal, Jones says that it was hot, humid and full of mosquitoes. It's not like the ships were any better. He said that on one carrier, the head had overflowed sewage into the sleeping quarters, causing many soldiers to sleep on deck.

"You couldn't get any rest," he said.

There were weeks when the entire unit would go without food. The White officers told the Black soldiers it was because their food had been lost at sea, but Jones said he knew they were lying. He'd seen the pits where tons of food had been dumped.

"I started going to different tribes on the island to get food," he said. "Fish and chicken. It wouldn't help completely, but it was something."

Iwo Jima was the big battle, he says.

"Our main objective was to keep the airstrip open," he said. "It's just a rock. Not a tree in sight."

Getting to the island – getting to any of the islands – for Jones was a worry.

"Me, not knowing how to swim, I was really in trouble."

At one point, trying to board the small boats, he had to descend a rope ladder. He missed the mark, fell into the water and the next thing he knew, he woke up next to his battle buddies. Someone, he doesn't know who, had pulled him out of the water.

For much of the war, Jones said he got used to tolerating the racism and mistreatment by his senior officers.

"Aboard the ship, they stripped all our ammunition away from us," he said, leaving the Black soldiers only with the rounds in their rifles. His superiors told them to 'take (bullets) off the bodies on the beach."

"Well, I thought that was a poor answer," he said. "The Japanese weapons  and our weapons are different … Anyway, I got the message. Later on I asked, 'Why is it that all the Afro-American units have White officers, and they said 'That's because they're used to taking care of slaves.' I thought that was a good answer. I thought that's what they would say."

During R&R, he learned that his entire unit was wiped out. The war was over for him.

Spending years in the South Pacific, Jones says he has many more stories to tell.

He continued his military service, making a career out of it and was promoted to the rank of sergeant.