It All Started on the Bus 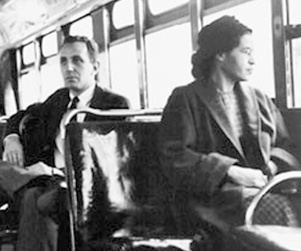 The hustle and bustle of city life paused for a moment Thursday to honor an act of courage and defiance that helped to make America a better place for everyone. Dec. 1 marked the 50th anniversary of the day that Rosa Parks refused to yield her seat on a Montgomery, Ala. bus to a White man.

Park's simple, dignified stand ignited a yearlong boycott of Montgomery's buses that lead to their desegregation. The boycott propelled to prominence a young minister named Martin Luther King Jr. and sparked the civil rights revolution that swept the nation. And significantly, Parks' act of resistance set the tone of nonviolence that characterized the movement and was so essential to its success.

In Portland, every TriMet bus pulled to the side of the road at noon on Thursday and observed a moment of silence in honor of Parks, who passed away in October. Bus operators read the following proclamation to their passengers:
"We ask for a moment of silence as we remember Rosa Parks' legacy. Today marks the 50th anniversary of Rosa Parks' arrest after refusing to give up her seat on a segregated bus in Montgomery, Ala."

TriMet took advantage of the occasion to unveil its new bus banners memorializing Parks' courage. The banners feature a picture of parks on the bus and the words: "It All Started On the Bus: Dec. 1, 1955. She changed the course of history."

The banners — along with three different placards that will be displayed on the inside of TriMet buses — will run through the end of February 2006.

Parks was a seamstress — and also an attendee of the laboratory school at Alabama State College and a long-time worker for the National Association for the Advancement of Colored People (NAACP). She had a deep and abiding interest in civics and civil rights, and was a respected member of her community.

On Dec. 1, 1955, she sat with three others in the fifth row of the bus, the first row that Blacks could occupy. Soon Whites filled the front four rows, and one White man was left standing. The bus driver asked everyone in the fifth row to move. Three complied, but Parks refused and was arrested.

NAACP Attorney E.D. Nixon told her, "Mrs. Parks, with your permission we can break down segregation on the bus with your case." She discussed it with her family and agreed. Her action sparked the young minister, the Rev. Martin Luther King Jr., four days later, to organize the boycott.

On Nov. 13, 1956, after a lengthy legal battle, the U.S. Supreme Court declared bus segregation unconstitutional. The court's mandate was enforced in Montgomery on Dec. 20, 1956. The Montgomery bus boycott ended the next day, after 381 days.

For more information, visit www.trimet.org/rosa. TriMet materials were used in this report.