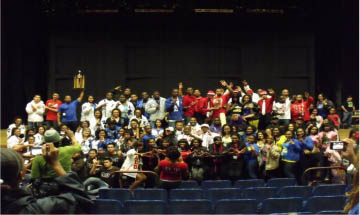 Oregon State University's Black Student Union will be showcasing their 9th annual Divine Nine Step Show:Step Into the Bad Side at 3:30 p.m. on May 28 at Lasells Stewart Center, 875 SW 26th St. in Corvallis. Tickets are $6 for the public, $5 for students, and doors open at 2:30 p.m.

"All of the cultural centers are being rebuilt and the plans for the new BCC building are well underway," Laura Forbes, of the Black Student Union, said. "We are hoping to get some community feedback on the building plans."

On Friday, they will hold the Yardfest from noon to 2 p.m. in the Memorial Union Quad (the grassy field in front of the Union).

"The Yardfest is a preview of the step show, where all multicultural greeks will be invited to come and step and stroll," Forbes said.

Later that day at 7 p.m., the Crimson and Cream Pageant: Welcome to Step is happening in Milam Auditorium. The Beta Psi Chapter of Delta Sigma Theta Sorority, Inc. and the Iota Iota Chapter of Kappa Alpha Psi Fraternity Inc. will be awarding a scholarship, having a Divine 9 Greek Trivia contest between the organizations and welcoming the competing step teams.