Video: Life Is Good at Seeznins Sports Bar and Grill

By Helen Silvis of The Skanner News
Published: 24 May 2011

Sam Thompson, host and bar owner: 503-477-7308
Bar staff: Andre, Lalu
All ages until 6 pm, then 21 and over.
Eats: Soul food, fried chicken baskets, wings, philly cheese steak.
Lounge is open as well as the bar Thursday through Sunday. Parties by arrangement.
Thursday is Ladies Night: drinks half-price for women, R&B karaoke
Friday: neo soul, comedy, karaoke and spoken word
Saturday: Live music, DJ OG One at the mix table every second Saturday. Other featured DJs are DJ Stack and DJ House.
Claim to Fame: Scored 100 percent on the health inspection. That's clean!
Extra credit: Seeznin is Sam's nickname and he is a standup comic. Stick around for some laughs. The Skanner News Video

Sam Thompson says he wants his brand new sports bar and party lounge Seeznin's to be a friendly community space –kind of like a Portland 'Cheers'. Families and kids are welcome until 6 pm. Playing dominoes or card games is encouraged.
"I wanted it to be a place where people could come and hang out with me like it was my own home," he says.
This home sports eight television screens, a fully-stocked bar, a menu of great eats and live entertainment Thursday through Sunday. Then there's Sam himself: your neighborhood youth worker, standup comedian and single guy around town turned bar owner and businessman.

"Running a business is like studying for an MBA," he says. "You're learning about everything all the time."
To give Seeznin's the true Portland vibe, Thompson has decorated the bar with articles, photos and basketball jerseys that showcase successful, home-grown athletes, such as: former NBA star Terrell Brandon; Terrence Jones the Jefferson High standout, who now plays for the University of Kentucky; Aaron Miles, who played for Kansas and now for the Reno Bighorns; and Michael Lee, another Jefferson High hoops star who went to Kansas, played in Europe and now coaches at Gardner-Webb University in North Carolina. And it's not all basketball. Check out Ndamukong Suh, the Detroit Lions defensive tackle featured in Weiden and Kennedy's new Chrysler ad. Like Suh, Thompson graduated from Grant High School. That's why he painted his building Grant blue, an unmissable bolt of color on Northeast 82nd Avenue, just down the hill from Madison High School.
After graduating from Grant, Sam went to Columbia Basin College on a basketball scholarship, then to Grossmont College in San Diego, where he took business classes. He moved to Indiana before finishing, he says, along with his good friend Fred Jones, a Sam Barlow High and University of Oregon alum signed to the Pacers. In Indiana he started a promotions company, which he ran for a couple of years before returning to Portland in 2007.
"That was rough," he says. "When I first got back I had no place, no job so I stayed with my uncle. I was sleeping on couches for 5 months." 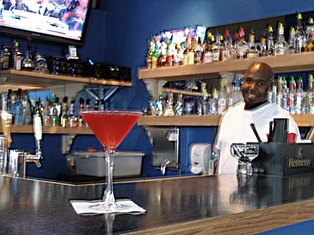 Then Self Enhancement Inc. hired him to help low-income students graduate from high school. For two years he did just that, helping dozens of teens stay in school. Losing one of those students, Andre Payton, to gun violence, spurred him to start the Restore the Village campaign. Now, he no longer works for SEI, but he continues advocating for youth through the campaign and as a mentor. At not quite 30 – his birthday celebration is the weekend of June 3—he says he enjoys being able to employ friends and relatives as well as host community parties and gatherings.
So did he get any seed money or business help to start Seeznin's?
"Nothing," he says. "I got together my own business plan and seed money. We renovated this whole place. What people need to know is that you have to have money saved up because there are a lot of expenses you didn't expect. Not having to owe anything makes it all the sweeter."
Sam was prepared for the challenge of running a business seven days a week. "I was a party promoter. And I helped out at a bar called The Huddle on NE Albina and Killingsworth. I managed that in 2008 and I just decided it was something I wanted to do."
Seeznin's finally received its liquor license in March.
"We were ready to open on September 2010, but we had to wait for the Oregon Liquor Licensing Commission to give us the ok. It's supposed to take 45 days but they kept us in review for 5 months. Maybe they are not used to a young black guy with no criminal history and a good financial record."

PHOTOS: Top Sam and Andre behind the bar at Seeznin's; Center: Sam Thompson; Above: Andre serves up a martini.