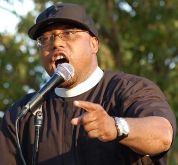 Rev. Lennox Yearwood Jr., President and CEO of the Hip Hop Caucus, will be in Seattle Friday May 20, and Saturday, May 21, keynoting this year's Green Festival-Seattle. Linking the issues of poverty and pollution, Rev Yearwood will address rising asthma rates and other health disparities from air pollution among youth and communities of color in Seattle.

"The fact that people cannot breathe clean air is un-American," Rev. Yearwood says. "Illness and death from dirty air among our most vulnerable populations – children and the elderly, particularly in poor communities – is a direct assault on American values of life, liberty and pursuit of happiness. Seattle, one of our greatest American cities, deserves better."

May is National Asthma Awareness Month. The CDC recently released a report which found that asthma rates are rising sharply across the nation: 1 in 10 children and 1 in 12 adults have asthma; for African American children, it is far worse: 1 in 6 have asthma.

According to the Asthma and Allergy Foundation of America, Seattle is one of the top 100 asthma capitals of 2011. The Seattle-Tacoma-Olympia metro area is the 18th most-polluted in the country for fine particle pollution, according to a report released by the American Lung Association.

Yearwood is the subject of a current Discovery Network feature documentary, "Hip Hop Rev," that premiered Earth Day 2011 on the Planet Green Channel. The film captures Rev Yearwood's activism and community organizing on environmental justice and climate issues in communities of color across the nation.

The documentary highlights Rev Yearwood launching environmental initiatives at the West Wing of the White House and his return to his home state of Louisiana post-Hurricane Katrina.

The Hip Hop Caucus Education Fund (www.HipHopCaucus.org) is a national, non-partisan organization headquartered in Washington, DC, dedicated to educating and mobilizing the urban community on social, political, and economic issues facing our country.

Yearwood is currently leading a number of green campaigns to educate and mobilize low income communities and communities of color to achieve health and a thriving clean energy economy.

The campaigns include "One Planet. One Voice." which involves young people in the U.S. in the global movement to solve climate change. The "Green and City" campaign engages African American mayors in the movement to green their cities and the "Green the Block" campaign is a partnership with the Hip Hop Caucus and Green For All that was launched from the West Wing of the White House in 2009.

The Discovery Network Documentary for the Planet Green Channel, 'Hip Hop Rev,' (www.HipHopRev.com) follows a year in the life of Rev Yearwood, capturing a stunning but often unseen side to environmental activism.