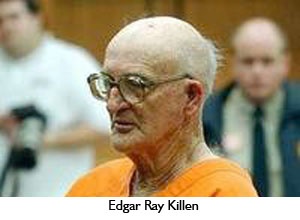 PHILADELPHIA, Miss.—The attorney for a one-time Ku Klux Klan leader who's serving jail time for his role in the 1964 killings of three civil rights workers says that if Edgar Ray Killen is granted bond, declining health likely will keep him at home until he dies.
The lawyers for Killen, 81, will ask Circuit Judge Marcus Gordon in Philadelphia on Friday to grant their client bond while he appeals his June 21, 2005 conviction on three counts of manslaughter. Killen was convicted of orchestrating the Neshoba County killings of James Chaney, Michael Schwerner and Andrew Goodman. The conviction came 41 years to the day after the three workers were slain.
"I understand his health is deteriorating rapidly," defense attorney James McIntyre said Tuesday.
McIntyre said he understood Killen could use a walker and wheelchair but "I don't know if he's able to get out in society to communicate with people."
"He's 81 years of age, had two legs broken, gone through the stress of a trial and is now confined by the Department of Corrections," McIntyre said. "Hopefully he does get better but indications are he's going to get worse."
McIntyre said the defense team had received Killen's medical records from the University of Mississippi Medical Center in Jackson and would attempt to introduce them during the hearing. He said they would also seek to have one of Killen's physicians testify.
Gordon granted Killen bond on Aug. 12, 2005, after Killen told the court that leg and arm injuries he received in a tree-cutting mishap and left him in constant pain and confined to a wheelchair except for when he slept.
During a Sept. 9 hearing, four law enforcement officers and a convenience store owner testified they had seen Killen driving around the Philadelphia and Union while free on the $600,000 bond.
Gordon — who presided over Killen's trial — revoked the bond.
Now, defense lawyers claim Killen's health has deteriorated since his imprisonment at the Central Mississippi Correctional Facility in Rankin County.
Killen was hospitalized in Jackson in April for complications resulting from the leg injuries he suffered in the March 2005 tree-cutting incident.
In recent weeks, Killen has undergone physical therapy at the state penitentiary at Parchman, where a hospital is located. He since has returned to the Rankin County facility and is able to receive therapy there.
District Attorney Mark Duncan of Philadelphia said his office has "doctors who will testify as to what his (Killen's) medical condition is. Our contention is that it doesn't matter. That doesn't change the status of his bond."
Should bond be granted, Killen would remain free while he awaits a decision from the Mississippi Supreme Court.
Chaney, who was a Black, and Schwerner and Goodman, who were White, had traveled from Meridian to Neshoba County on June 21, 1964, to investigate the burning of a Black church. They were stopped for speeding and were held for several hours in the Neshoba County Jail. After being released, they were ambushed a few blocks from the jail, chased several miles down a dark country highway and killed.
Killen is the only person to ever face state murder charges in the case.
— The Associated Press