Brian Stimson of The Skanner News
Published: 19 May 2011 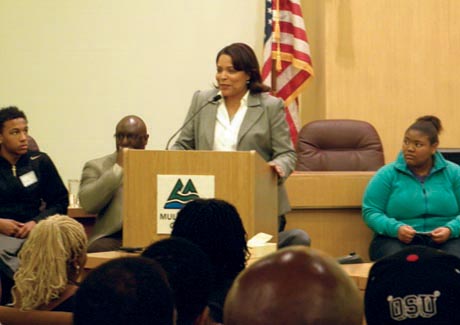 When it comes to budget decision making, there's an old saying: The squeaky wheel gets the grease.

And last week, when Multnomah County Commissioner Loretta Smith held a meeting directed at African American males from the ages of 12 to 25, there were a lot of squeaky wheels.

The meeting hall was packed. Drawing in many more – and older -- men than intended.

"They felt they had something to say," she told The Skanner News.

And say they did. For more than two and a half hours both attendees and scheduled experts talked about many of the long-standing issues plaguing the Black community and what was needed of government, individuals, schools and the community to help solve the diverse range of problems.

Many of the men were students, expressing their frustrations with a school system that didn't challenge them enough; students who were unaware of the health services provided free of charge; difficulty in finding mentors; frustration with classmates who didn't anticipate their future, difficulty of landing a summer job, etc.

For many expert panelists, there was no one or simple solution.

Dr. Harold Briggs, Portland State University: "We don't have skills for success embedded in education systems or spheres in life we frequent."

Aldis Hodge, actor on "Leverage": "You have to be willing to sacrifice, look at yourself. This is who I am. This is who I want to be. Learn from your mistakes to be better than that."

Smith hopes the meeting let the county's Black men know that there are public forums for them to voice their concerns and frustrations.

"This was a group who got the opportunity to speak about the issues that impact their lives," she said.

Aside from the weekly county council meetings, Smith said she also wants to schedule further public meetings for underrepresented communities. While there is definitely a demand from Multnomah County's Black men, Smith knows there's a need to hear from others, such as the county's Latino community.

With budget discussions for the next funding cycle coming up in the next several weeks (for a full schedule, visit www.web.multco.us and click on the budget hearing schedule link), Smith says the input she receives from various groups is valuable in arguing for the continued funding for important programs.

"When we are talking about cutting, say, programs that deal with seniors, like Project Independence, all the senior advocates come out in mass to say we can't afford to cut our programs, we need to protect our seniors, keep them in their homes, in our neighborhoods, keep our neighborhoods healthy and strong," she said. Now when we're talking about youth or underrepresented minorities in the county having health crises, educational crises, juvenile justice crises, we never hear from those folks. One of my first attempts to give that group a voice and to let them know they have a voice they can use. It's not always me calling on them. They're welcome to come in the door anytime and to organize themselves and to let us know what we're doing right or that we need to improve upon."

All departments are having to deal with a two percent across the board budget cut.

The next public budget hearing is being held from 6 to 8 p.m. on May 31 at Immigrant and Refugee Community Organization, 10301 NE Glisan St.